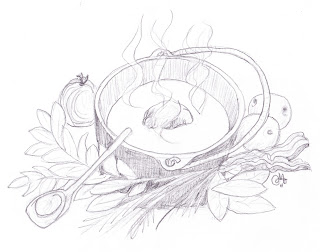 Stone Soup is a fairy tale told in England, Ireland, the United States, Germany, and many other countries. Contemporary versions tell of a needy person tricking the greedy into sharing food and lodging; usually it is a destitute soldier or clever beggar offering to make soup with a stone, asking only for a kettle from the unwitting scrooge. But like other legends, this folktale has deep prehistoric roots, reaching back into the bitter cold stone-age.

Once Upon a Time long, long ago a great part of the world was frozen most of the time. In this icy world, animals broke their teeth trying to chew meat from the frozen carcass of a fresh kill. Fingers and toes would suffer frostbite in only a few minutes if not covered properly – even then excursions outside were brief. The people who lived in this ice age built and heated houses, made quilted clothing, and cooked their food. Duncan-Enzmann has translated from their inscriptions blueprints for houses and instructions for venting fireplaces. Stones were abundant and were used for many things: tools, weapons, contracts, and for heating beds and cradles – not unlike bed-warmers of the early pioneers.

Stones were also inscribed with instructions to make and use fire-bows, make medicines, and even make “stone soup”. In a regular modern winter there is nothing like a nice cup of hot tea, cocoa, or chicken soup to warm up a cold body. I remember winter bird-watching with my dad on Plum Island. He always brought a thermos of hot chocolate – said it would keep me warm. During hard times when food is scarce, or on the battlefield in winter, even a cup of plain warm water helps warm up a cold body, and with a few drops of molasses or honey in the water, becomes a delicious treat.

During the ice age of ca. 12,500 BC, knowing how to warm up could mean the difference between life and death. Leather pots were made and filled with water, and a “boiling stone” (ones that did not explode) was heated on the fire. When it was good and hot it was put into the water. The stone simmered the water, and, with bits of meat, vegetables, and spices, a nutritious soup was made. The heating stone would need to be cleaned before putting it in the water. Ashes from the fire would have to be removed; brushing it with branches of dried herbs added flavor to the broth, branches of willow (from which aspirin is made) provided gentle soothing for those who enjoyed the soup.

Meat is scarce in the fairy tale, and fatty meat was scarce during ice age winters. Without some fat in the diet a person can starve to death, even with an abundance of other foods. The only place fat could be obtained in deep prehistoric winters was from the long bones of a female horse. The bones were added to the broth of the stone soup, cooking out the life giving fats, just as we cook chicken soup today.

Like most fairy tales, this one has a struggle (freezing weather and scarcity of food), a hero (the stone), and a happy ending (a steaming bowl of yummy soup). 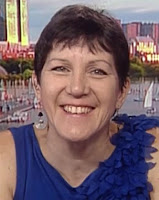 Posted by The Symbologist at 3:00 PM