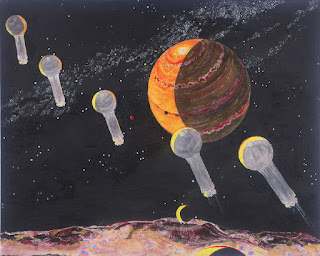 R D Enzmann 1949
The Generation Ship is a timid concept. It is brave, and at the same time anguished, hesitant, and fearful. The Generation Ship can succeed, it can carry huddled masses in enormous arks across frontiers into new lands, onward to new and better lives.
I know all too well the timidity that plagues most people, the hesitation and the fear of venturing into new lands across distant horizons into frontier regions. Such people may be compared with the masses huddled within a multi-Generation Ship.
I have so often seen what appears to me as a “Huddled Masses” syndrome. I am (old?) enough to remember the introduction of the horseless carriage (the automobile “car”, or as in Sweden, “Bile”). It was resisted. I remember the resistance to locomotive (the iron horse) by a combination of entrenched businesses, ill tempered bellicose savants, and varied holy men. The use of electricity was a surprise. Its implementation swift, practical, economic, and wonderfully beneficial.
And yet, even the most timid will venture a little. Then a little more, and yet more: growing ever stronger, wiser, and more competent. Many have died, and many more will die in the future; some quietly, modestly scarcely seen, many variously struggling, and some magnificently, as the Greeks and Thermopylae in the east, and Syracuse in the west stood fast to change worlds history.
How different are the maps of coastal navigators and those who sail the great Mediterranean out of sight of land. How different again are the maps of sailors who challenged the mighty oceans of the world – the Atlantic, and a vast Pacific. How different were their ships.  The proud (sheer and lap-straked) Viking ships which could surge through the frightful seas and storms of the north Atlantic.  They are as different from the lesser Umiak as the proposed Echo-lance starships are from the interstellar multi-generation arks.
The magnificent Viking ships evolved into the unparalleled Yankee, English, and the European Clipper Ships.  I have sailed under canvas in an American Clipper ship, it is, it was, wonderful; superlatives fail me.  I can imagine the races between greyhound’s of the sea such as Thermopylae, the Cutty Sark, and others across the world.  Lance-like ships will - and must - evolve into equivalents of the Boeing 747.  The Clipper Ships were at home in, and sailed well in all oceans, as does the beautiful Boeing 747 in the air.
I have smelled the tar and oakum, listened to the musical tink, plinck, and resonant thump of mallets as men’s swarmed over the hull the clipper, caulking it.  I briefly work at it; how good lunch tasted then. I have walked in sailing lofts where women, children, and a few men stitched, hemmed, and edged, etc. the sails which would soon challenge the winds of Cape Horn. They created the sails upon which the lives of fathers, husbands, brothers, and friends would soon depend.  And often, the man who furled, hauled, tied, sometimes beat at sails with fists to loosen them, knew who had staged, cut, and even woven the fabric.  The sailor’s a knew who had made their ropes on the today forgotten rope-walks.  Quite often in old bath Maine a sailor would have been on a trip importing hemp and tar, worked on a rope-walk, and helped rig his own ship.
It is a great sight, a great moment, when a new launched ship, fully-found, is under the hand of a master mariner headed for blue water.  The devoted work of hundreds, for years, in the hands of one man – who in whole and/or in part holds their work, toil, hopes, hearts, and many of their lives.
The rollout of a new airplane is a treat.  It is even more delicious if you are part of the community that built it, for somewhat, but not quite like the sailing ship, the airplane is yours.  There are so many things to know and to be done in building an airplane.  At its best it demands care, great skill, and love, yet it is different from the Clipper Ship – perhaps the difference lies in the nature of the voyages.
I think it is the Starship – not the Generation Ship with its huddled legions - ships like the Echo-lance, moving almost the speed of light, with small, proud, independent crews, that will be most like the Clipper Ships.

Edited and uploaded by Michelle Snyder, White Knight Studio, from the archives of Dr. R. Duncan-Enzmann.
Posted by The Symbologist at 12:00 AM