The Lady of the Lake, a verisimilitude

The Making of a Legend 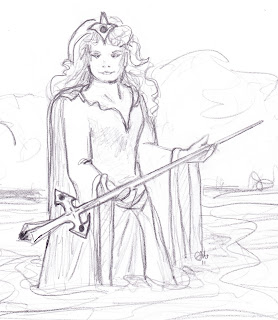 Mythologies, fairy tales, legends, and folklore all have their roots in history. Oral tradition and picture language have been used for millennia to record knowledge and historic events. They evolved into the stories we have today. If one knows how to see the pieces that are there, much can be learned. Arthurian literature is no different.

One of the most popular and endearing legends in the Arthurian arena is the Lady of the Lake. Perhaps it is because she is a female, or a water spirit, or the bringer of power and hope; whatever the reason, the Lady who created the most famous sword in history still touches our hearts and imagination with her magic.

To decode the real events which spawn legends is sometimes to shatter the magic we hold so dear. But there is power in knowing, and so it is worth the price. She would have wanted us to know. So here is a story to tell the story of how the Lady came to be. An explanation of the history follows.

The Ladies of the Iron Swords

For 1200 years they blocked the Mediterranean. No one, and no thing got through without their permission. No food, spices, fabric, tools, or most importantly, no tin. Without tin we could not make bronze weapons to arm our soldiers, to try and free up the trade routes that we needed to sustain our lives. People were dying. Generations passed.

Then, in the farms of the north lands an observation was made on a bitter cold winter night by a mother tending her fire. She had collected enough peat from the bogs to get them through the harsh winter, and now peat was blazing in the hearth, the flames warming the cottage. Bellows blew gusts of air at the flames to help the fire rage against the cold. She sat close to the warmth. Gazing at the fire sort of dreamily, she noticed something oozing slowly out of the peat where the air from her bellows enraged the flames. It was making a little pile on the bricks below as the flames consumed it; drip, drip, drip. A small rivulet formed, and as it trickled away from the flame it cooled and hardened.

That is when it all changed. Great fires were made, and the drips were collected and given to the blacksmith. Iron was strong - stronger than bronze. Soon men stood at the forge, pounding it into great swords and other tools. They were used by the king’s men, the knights, to clear away the blockade that choked access to the Mediterranean. These great men became legends, heroes of their time. Stories were told about them as families sat around the hearth and soaked up the warmth of the peat fires. They told of dire battles, and great victories. They told of desperate attempts to rescue beloved wives and daughters from the fortresses of the enemy.

The greatest of these legends tell of a wondrous lady, a goddess of the lake. It was her, they say, that gave us the magnificent swords used by the kings and knights in the battle for free trade. She raised a great sword from the peat bogs of the north, and handed the magical weapon to our beloved king; it is said he never lost a battle as long as he held Excalibur. Many tools of these brutal battles were provided by the great Lady of the peat bogs.

To insure her continued blessing, and assure the abundant supply of the iron that the swords were made of - swords that were harder than the bronze of the enemy - the knights pledged to return their sword to the Lady when they retired. It was an honorable tradition. Give back what you were given, so others could receive when they were in need.

The kings men and the iron swords cleared away the enemy, and it was the end of the 1200 year long blockade of the Mediterranean Sea, but the battle against a brutal determined enemy continued. We took all that was left and moved toward England. All 12 kings that could still call themselves kings, and all their people, gathered together to create a strategy to do two things: to retrieve their women and daughters from the barns of the enemy, and to regain control of their fallen kingdoms.

The bravest most determined men were knighted. And to assure equality between the kings, a great round table was their meeting place; a table with no head. Here they met, broke bread together, planned their adventures, and gathered to celebrate victories. Some of the greatest legends in history grew out of the stories told by these knights of the Round Table as they battled the Huns. Many died trying to find and rescue the "Grail," the princesses of the North. A pact had been made, and an oath had been sworn. Women and children first. Save the women and children. Without them a kingdom dies.

So the Lady of the Lake helped them with magnificent iron weapons, and they honored her by returning what was hers when they were finished. She blessed them as they honored their women, cherished their daughters, and rescued the captured. Finally, a relative peace came upon the land. The Great Lady returned to the water. Maybe one day we will need her again; there is no end to the bitter conflict. Many still die, or disappear. We have made great strides in our technology, battle styles have evolved. But they are still the same; designed to reduce the population.


It is amazing what we can know just by observing a fire in the hearth. Knowledge is a powerful ally, and a dangerous friend. It is able to make life better for a whole planet. Yet some would try to be in control of it all - so others who "know" must be eliminated. We must remember the gift of the Lady of the Lake. Our weapons may be different, but our pact and oath is the same. Our enemy is the same. We hope fortune favors our knights.

Above is a verisimilitude about the history of the fall of the tin blockade that choked the Mediterranean for centuries. The enemy was successful in holding off any trade or travel that required crossing the sea, the most accessible route, by placing sentries with armies at four locations. Their bronze production supplied weapons to the army who maintained vigilant watch for centuries, until iron was discovered in the north by the Celts. Then iron weapons were supplied to the freedom fighters and they broke the stranglehold, freeing up the trade routes. Great stories were told, and scattered records were preserved with oral tradition; the history of this time was destroyed, deconstructed, and rewritten. But it survives in the tales of Arthur, and in fairy tales from Avalon and the woods and sea of Ireland, Scotland, and the dark forests of Germany. It is there, if you can see.

Michelle Snyder is a professor of mythology, and an author, publisher, speaker, and artist. She  did her post-graduate research at the University of Wales, decoding ancient and prehistoric symbolism, mythology, folklore, and fairy tales.  Her artwork has appeared in galleries from Massachusetts to California. Michelle is co-owner of White Knight Studio, and founder/VP of the Foundation for Research of the Enzmann Archive.