Symbols are for Babies 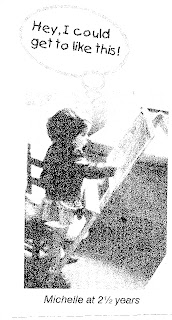 Our modern world is full of symbols; they surround us every day. A compact form of communication, symbols convey a lot of information with a few lines and shapes. One can understand complicated written instructions more easily when accompanied by images. Studies have demonstrated that babies recognize images and symbols of people like “mommy” that are familiar and important to them.  The Human Face, a film by John Cleese, reveals the results of studies that were done with sheep, and images of other sheep - some that were part of, and some that were strangers to the flock – familiar sheep were recognized by the test subject sheep, and strangers ignored. The brain is configured to store and recall familiar images. This is necessary for survival.
Toddlers’ picture-books are the foundation of reading comprehension. Children’s textbooks are filled with colorful images to help them learn. 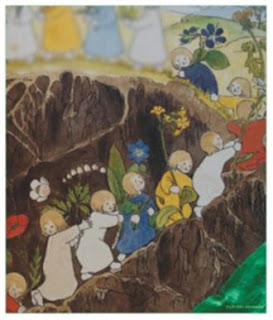 A good example is a small book, published in German in 1906, and titled Etwas von den Wurzelkindern (The Root Children). The colorful pictures in this little book teach the cycle of plants as they bloom in spring and summer, then die off in autumn, their seeds and roots hibernating underground during winter, until the following spring. Mother Earth cares for the plants, symbolized using cute small children. Their winter home, for they are seeds that sleep all winter, is under the ground where they sit with candles, sleep, and wait for spring. When it arrives the children troop to the surface in beautifully colored dresses to play and grow in summer’s sun and warmth. When autumn arrives they return to Mother Earth down into the soil, their winter home. This sequence of pictures tells the story even if one cannot understand the few German words accompanying each page.

Although people acknowledge that contemporary symbolism conveys mathematics and science, a scholar of symbolism, de Santillana, states that:

He (the modern reader) does not think of the possibility that equally relevant knowledge might once have been expressed in everyday language. He never suspects such a possibility, although the visible accomplishments of ancient cultures - to mention only the pyramids, or metallurgy - should be a cogent reason for concluding that serious and intelligent men were at work behind the stage, men who were bound to have used a technical terminology.

Some symbols are so commonplace we have developed automatic associations to them, the brain learning in early childhood to translate meaning. Images, therefore, take on a language all their own. “A picture is worth a thousand words” is a very familiar expression, but if we think about it - which words? How many words accurately describe a dog? If two people read or hear the same description, do they imagine the same thing? How often do we attend a movie after reading the book on which it was based, and thought, “That’s not at all what I pictured!”

Images depict for us visual properties that cannot be accurately verbalized. Symbols depict complex concepts that would take volumes of written language to explain. “A picture is worth a thousand words” is a proverb reflecting the idea that complex stories can be described with a single image, or that an image may be more influential than a substantial amount of text. This also applies to the process of visualization where large amounts of data must be absorbed quickly. Fred R. Barnard, in the advertising trade journal Printers' Ink, used this phrase to promote the use of images in advertisements that appeared on the sides of streetcars. The December 8, 1921 issue carries an ad entitled, One Look Is Worth A Thousand Words. Russian writer Ivan Turgenev wrote (in Fathers and Sons, 1862), "A picture shows me at a glance what it takes dozens of pages of a book to expound." The quote is sometimes attributed to Napoleon Bonaparte, who said: "Un bon croquis vaut mieux qu'un long discours" (a good sketch is better than a long speech).

This is not to say that images negate the necessity of words; the combination of words and pictures is vital in communication. An enormous amount of history was preserved and passed on through thousands of years using visual symbols and oral tradition. From these traditions many symbol systems have developed, some esoteric, some exoteric in nature. Learning symbolism may start with babies, but it can be a lifetime of adult academic study.