The Next Giant Leap

Recent discoveries have uncovered evidence of lost Homo Sapiens-Sapiens civilizations that were kept secret for centuries. Thousands of archaeological finds throughout Europe pieced together reveal the use of intricate geometry and advanced sciences by people previously described as merely hunter-gatherers. Ice-age languages pre-dating Sumerian cuneiform by thousands of years trace steady progress of astronomical knowledge and applications. Ancient scientific symbols exhibit understanding of physics, chemistry, geography, mathematics and geometry, and pre-date the Greek masters; this proves that we have been highly-developed, introspective problem solvers for longer than we imagined. A vast network of public utilities for surviving the Ice  Ages were improved on by later cultures thriving in warmer climates; all indicate a never-ending worldwide human interest in, and constant evaluation of, the heavens. Navigational cartography and symbol migrations indicate world ocean voyages in distant ages past. Cyclopean masonry and building skills at places such as Baalbek, Lebanon existed tens of thousands of years ago and cannot be replicated by today's engineers or machinery. The world wonders at how ancient surveyors measured their architecture and observatories, calculated latitudes of the Earth creating the divisions of time, and mapped the celestial sphere. Yet, as by example, the very same sun, moon, planets and stars remain a consistent benchmark for us today.

2. Building upon a Foundation

Sufficient are the worries of the day, but our understanding of today relies upon our understanding what has come before. Symbols and languages in use today are built on ancient common ancestry. The more we learn from our own history, the more we avoid repeating disasters from our past, and the better we are able to build our future upon the discoveries and knowledge which came before. Men and women like us prepared the world for the next generation; we now must realize we have been improving our utilities over the course of a Great Year (26,000 solar years). For this very reason  we recorded the migrations of tetra-fauna onto cave walls, inscribed our knowledge medicines for healing onto stone, bone, and ivory, and related seasons of life to the ecliptic. Great surveyors and masons of history used the stars and planets to measure time and place. Their discoveries are the foundation for the unlimited frontiers of human development.

If necessity is the mother of invention, providence must therefore be its father. The ethics of 'women and children first' have been our companion all the way; there is no doubt that love has also. Childbirth and childcare remain constants as we continue around the Sun. Industries such as textiles, healthcare, education, architecture, and trade have always been necessary. Daily food, shelter, and clothing perpetually charge us with temperance, fortitude, prudence, and justice. The needs of  mothers and newborns motivate vast improvements in utilities for life on Earth, and these acts of charity require hard labor. Earliest records tell stories of survival: how women provide language and textiles for their charges, as men battle the elements for their clan's survival. These are the foundations of existence that give meaning and purpose to the craft of building our world. Our human race survived Ice Ages, comet strikes, volcanoes, earthquakes, tsunamis, and droughts - any climate nature dishes out. That we are here is testimony to this fact.

However, in addition to the rages of natural disasters, wars kill millions of our human race. New technologies have created machines of mutually-assured destruction, and our fear of their power deters us from repeating their use. The last World War ended when we shocked ourselves by using atomic power against our world. Japan has equated the power and fear of their latest natural disaster with that of what they remember from August 9, 1945. Have we finally ensured our demise after a Great Year of scientific achievement, or do we care enough to hope for an alternative ending? Atomic power should be feared as a weapon of mass destruction, but like a stone hammer, its power can be channeled and used for constructive achievement. Electricity and fossil fuel powered our engines last century, but what will power us further in this next procession of the equinoxes?

5. The Next Giant Leap 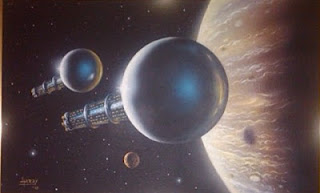 We stand in awesome wonder on the shore and stare up into the greatest ocean we have ever seen. Ancient symbols illustrate our history of it, we have built our temples as allegories to it, we have measured our time and world by it, and we have planned our survival around it. We have the maps and formulas to explore its widths, its depths, and its heights. We have understood the reasoning and problem-solving necessary to choose a direction, chart our course, and explore it. Yes, we now have the engineering and technology to build the ultimate machine, to build and operate the ultimate engine, powered by an unlimited fuel supply, to survey this ocean in no-time. And yet, a generation of pioneers is watching their lives pass before the advantage they have provided is realized. We stand at the threshold of the next "small step for Man" enabled for our next "giant leap for Mankind"- the ultimate human endeavor. Will we build upon the advantage we've been given? With knowledge comes responsibility, and our example to follow is our heritage of providence.

Jay says: "Dr. Robert Duncan-Enzmann's translations of Magdalenian inscriptions from 12,500 BC have increased our historic record forever and provided invaluable information about our ancestors. Inscribed mostly by women, and predominantly about making textiles and child care, the stories which they tell are drama at its best."