The Tarot, the Zodiac, and Ancient Knowledge 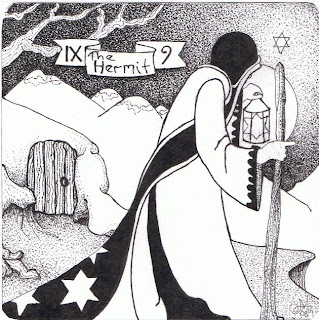 The Hermit - Sun Moon Tarot, M Snyder
the hexagram is a symbol for sunrise and sunset at equinoxes and solstices

Passing knowledge on to future generations has been a human challenge and activity for millennia. Tens of thousands of years ago our ancestors watched the sky and observed the repeating patterns of the stars, and the cycles of the planets. Star-patterns were connected to events on Earth, allowing the development of seasonal calendrics, which greatly improved their quality of life.

This knowledge was recorded with oral tradition in great stories which were told to children to teach them the cycles of nature associated with the constellations.

Astronomy encompasses a wealth of information, demanding descriptions of many fascinating events. We see these events described in some of our most endearing childhood stories like “The Russian Firebird (Phoenix)," in Mother Goose and nursery rhymes like “Hey Diddle Diddle,” and the oldest stories in the world – the Zodiac.

Teaching accurately, consistently, and in detail is possible even without phonetic writing and alpha-numeric numbers. The ability to do so was absolutely necessary if the human race was to survive. Archeo-astronomers know and megaliths tell us that this was done. Just how, is something of a mystery.

It is likely that the method was known and understood until libraries were burned, monuments were destroyed, inscriptions were pounded to dust, and memorizing history was outlawed. Still, it is impossible to destroy everything; scraps remain: the Antikythera, Peri Ris map, megaliths, shadows beneath palimpsest, documents like the Book of Thoth, and of course, myths, legends, fairy tales, and folklore.

At least two major fountainheads of knowledge survive today, yet they are scarcely noticed as such. One is Masonic ceremony and lore. The other? Playing cards and tarot cards in combination with the zodiac – essential roots of Masonic science obscured by a trivial veneer called the occult.

Yogi Berra once exclaimed “prediction is difficult, especially about the future.” Within the context of divination the many mandalas for arranging the cards are excellent. It is true that many charlatans have come and gone who misuse the cards - and astrology - for their own gain. However, the archetypal images of the classic Tarot do speak to us about the future – not one future, but many possible futures, and prompt our brains to reconsider situations portrayed.

However, there is no indication that the patterns or sequences in which the symbols are arranged were the foundation for teaching astronomy millennia ago. The symbols themselves contain information. Just as flash cards of today are used as memory aids, so too were the symbols of prehistory.

A Little Wooden Book, Sun, Moon, and Earth, by Robin Heath had some interesting facts when considering the astronomical information contained in cards:

Tarot cards also contain strong astronomical, and situational imagery. The cards likely derive from 4200 BC megalith mariners working at Lixus, Nabath, and Byblos, with knowledge from a thousand years earlier. The symbols, inscribed on bone, stone, and leather, were a mnemonic exercise aided by the images.

According to Duncan-Enzmann a full set of cards, or images, would originally have included:
We can decode some astronomical symbols from prehistory in Pamela Coleman’s illustrations for the Rider-Waite Tarot. Many of the cards depict the infinity sign – the symbol for the analemma (a scale shaped like the figure 8, showing the declination of the sun and the equation of time for each day of the year):
1) Leo/Virgo at equinox,the Sphinx
2) Solar, Lunar, Stellar year
3) The Venus Clock
4) Solar V winter solstice sunrise and set 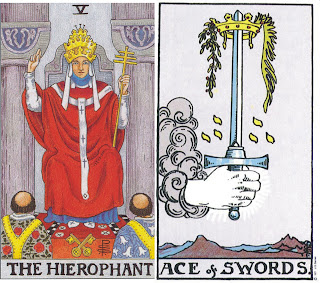 Oral tradition and symbols have preserved our history for millennia. The invention of the printing press allowed literary records to be duplicated and widely distributed – but it was many years before images could be reproduced. We became more familiar with the modern language of letters than the ancient language of cardinals (recognizable images). To learn how to see the information in images and symbols increases our ability to learn, and to share, knowledge.

Our understanding of today is built upon our knowledge of the past, and our vision for the future is built upon today. I was told once that winners write history books. To have the best possible future, we need knowledge of what really happened in our past. Not just what the winners want us to know.