Narcissus and Narcissa, a story of love and grief

Today, Narcissism is seen as an unhealthy fascination with one’s self.  This is derived from the ancient myth about a beautiful boy named Narcissus. The story as told by Ovid is about the goddess Echo who falls in love with him and does everything she can to show her love for him. Narcissus is unimpressed and rebuffs her affections; scorned, she runs into the woods. Intrigued, Narcissus went into the woods looking for the mysterious woman. After some verbal exchanges which relate to her name – Echo – Narcissus searches for water, and kneeling over a lake he sees his reflection. According to the modern myth, upon seeing his stunning features he becomes aware of all the pain he has put women through over his beauty. He kneels over the water and then dives in, drowning. The nymphs find a beautiful flower where his body should be, and name the flower after him. 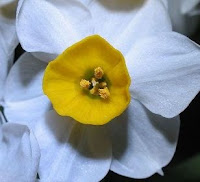 In one myth, the goddess of the forest appeared and found that the lake, which had been fresh water, was transformed into a lake of salty tears. She asked the lake why it wept.

“I weep for Narcissus" the lake replied.

"I am surprised that you weep for Narcissus, for I pursued him in the forest, but you could contemplate his beauty close at hand."

"Was Narcissus beautiful?" the lake asked.

“You do not know that?" the goddess said in wonder. "After all, it was by your banks that he knelt every day to contemplate himself !"

The lake was silent for some time. Finally, it explained the it wept for Narcissus because  of his beauty, but that in the depths of his eyes it could see its own beauty reflected.

Palimpsest gathers on story, myth, and symbol as they are adapted by cultures. It would seem that this modern version has been altered to suit the culture of the day. Looking deeper into the origin of this story, extracting the events which are told in other allegory and myth, there is a more compassionate story to be told in which Narcissus and Narcissa were twins. Pausanias records the story this way, and it is a story of love, loss, and grief. This older version by Pausanias locates the spring of Narcissus at Donacon 'Reed-bed' in the territory of the Thespians. He expresses doubt that someone could not distinguish a reflection from a real person, and cites the lesser-known variant in which Narcissus had a twin sister. In his account, both dressed similarly and hunted together (as twins would) and that Narcissus fell in love with her. Anyone who is a twin, or knows twins, would agree that this is not uncommon. Indeed my own twin sisters seemed to have a world of their own, how much more would fraternal twins become exclusive? Pausanias also writes that when his twin died, Narcissus pined after her and pretended that the reflection he saw in the water was his sister. Narcissa was later changed to Echo, the mountain nymph who falls in love with an unresponsive, self absorbed Narcissus.

Some Greek tales suggest that Narcissus was sexually attracted to his sister, and when she was alive, made love to her. This also is believable, as in some cultures today and some cultures from which myths flow, family marriages were not unusual; Narcissus was born at a time when sibling marriage was common. Differences in ancient myths and their root stories are partially due to the life span of information, and partially due to human intervention; folklore is destroyed or changed by enemies, or those seeking to change the course of the future.

The story of Echo involves jealousy of another goddess – stories of jealous Hera are common in mythology and tell of punishment inflicted by the angry goddess. Medusa and Narcissa suffered this fate: deconstruction of her true story, replaced by one of questionable morality. From this version of the myth told around 1200 BC, the tale of the devastated twins was deconstructed to put their love in terms of morality and sin, Christianized around 300 AD.

The myth of the twins also connects to the symbolism of the stories of Gemini. Other aspects of the Narcissus myth relate to watery mirrors which were used before the Watchers went to Egypt (records of which are mentioned in Uriel’s machine) and to the king’s orb which reflects light. The message in this myth of love and grief is now that marrying family is bad, love of self is bad, and it conveys hatred of mirrors. Some accounts say Narcissus commits suicide, another sin.