Origin of the Megalithic Yard

The cord, pendulum, and rod are tools which have become Masonic symbols. Threads spun of filaments, then roved into strings were essential for making circles and measuring time and distance. Their history shows that the mathematics and geometry of astronomy began with spinners and weavers (Duncan-Enzmann).

For millennia the most time consuming activity has been making clothes. Textiles began with weft weaving, then ground looms; Magdalenian ladies of the Rhône-Rhine-Danube trade route used weighted upright looms (shown – ca. 12,500 BC). During the agricultural revolution men and women still devoted much of their time to making textiles for both their own use, and to trade. The business of creating and trading textiles built entire empires: Acadian, Egyptian, Minoan, Sumerian, Greek, Austrian Fuggers, and British.

Cords, pendulums, and rods were used for astronomical measurement beginning with solar and lunar cycles, then planets for a seven day week. Our ancestors named patterns in the sky: the twelve monthly zodiacal houses (ca 28,000 BC). A few thousand years later the same patterns were clocked through a defined 24 hours, then divided into 60 minutes (using the moon, which is 1/2 0 wide, dividing one 300 zodiac house into 60 lunar diameters). Searching for Neolithic numbering systems, Duncan-Enzmann came across symbols which record cyclical astronomical events (ca 4600 – 2500 BC):

Time is measured by the swing of a pendulum. Ancient astronomers timed planetary cycles and named the seven days after them. The length of the cord for the pendulum determined length of the measuring rod known as the megalithic yard. With these tools, measurements were standardized and used for building a continental utility of megalithic observatories. Rod and cord symbols are evident in many ancient cultures.

Use of the cord and rod for measurement laid the foundation for knowledge of dividing a circle to 10 areas. Mathematical exploration by a few geniuses had already discovered that circles based on sunrises – 365 – could not be divided to a single degree (365 factors into 5, 73). Nor could circles based on star-rises (366 factors into 2, 183) A solution was found using a 3600 circle (360 factors into 5, 3, 3, 2, 2, 2). These calculations are difficult with our numbers – imagine doing them with Roman Numerals, and our ancestors didn't even have those.

Clocking measures an interval of time – how long something takes – as with a stopwatch. A clock shows you what will be, and what has been. The pendulum and Venus increased the ability to divide circles accurately to determine longitude, which increased travel and trade through vastly improved navigation.

A representation of this process was found in the patterns woven by women and in string games like Cat’s Cradle; a five pointed star was created, dividing a circle into 720 sections. Pegs were placed in the ground within a circle, and a cord was stretched around the pegs creating a perfect pentagram. Similarly, Betsy Ross could cut a perfect five pointed star from a piece of cloth, knowing how to fold the cloth, and where to cut it. 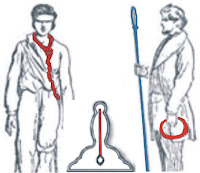