The Art of Inflicting Love and Death 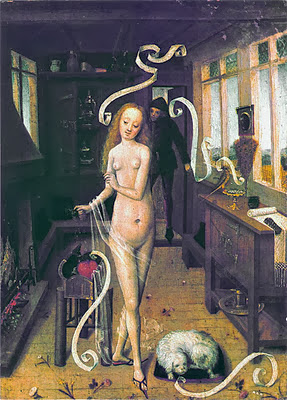 Of all the spells cast during the Middle Ages two were widely used, and held a very important place in magic: the love spell (sometimes called the philtre) and the death spell, both of which are at the top of man’s great preoccupations and held much fascination. Love and death were fearsome sacraments of the Diabolic Church and anyone could, at anytime, be affected by them.

Love spells show up in literature and epic plays, and in accounts of miracles. Love is a powerfully motivating force and is easily set in motion. A potion to do just that is made from wine, herbs, and other drugs to give it the ability to inspire man or woman, when they drink it, with irresistible love for a certain person. Tristan and Iseult drank a philtre intended for Iseult’s mother and were filled with passion that to them was fatal in the end. The recipe for philtres varied. One requires the heart of a dove, a drop of blood, both powdered. Another consists of powdering a root, an orange, and add a piece of paper with the word of ‘Sheva’ mixed into it.

A picture from the mid 15th century shows a naked young witch with long blond hair standing in her den, and in her hand she holds a jar from which drops drip onto a heart which is resting in a box on a stool. The philtre works quickly –  a young man already enters the room through a door behind her, walking as if entranced. 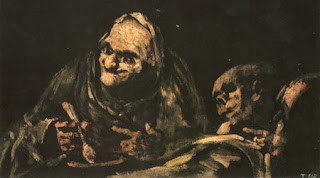 Those who were incapable of compounding philtres for themselves would have to hire professional witches. Ironically it was usually the oldest, and most hideous, repulsive witches who knew these recipes for love-liquors, as shown in this painting by Goya.

Love spells were not always made as a liquor, as doubtless there were difficulties in getting the person to drink it. This process was replaced by easier more efficient secret processes. One manuscript has fifty such “secrets;” one of which says that to gain the girl or woman you must pretend to cast her horoscope, to “find” when she will be married, then you must look into her eyes and repeat the words of a particular Latin phrase. Some enchantments involve touching the person, once with juice of vervain on your hands, and once with a spoken phrase. These simple processes make hunting for and using more complicated methods quite unnecessary.

Love is not the only powerful driving force. Death is ultimate. Now we come to a most terrible spell – that which, unseen, attacked human life and spread terror in the very courts of Europe. This is the Death Spell.

For this devious work, one must form a waxen image of the intended victim, inflicting wounds upon it which would be exactly reproduced at a distance by occult transmission, upon a living person who would thus die mysteriously without apparent cause. A human heart could be substituted for the wax figure; long needles would be thrust into it, with the intention of piercing the heart of the one to be killed.

Documents with symbols relating to this kind of spell are extremely rare. Still, in a picture by Frans Francken, An Assembly of Witches, there is a human skull on a table; there is a knife driven into it. This is an attempt at casting a Death Spell. This was not the usual procedure. Skulls were seldom used, wax figures were the standard tool for this evil work.

This horrific kind of spell was popular in the 16th century court of France. The Biblioteque National has two letters from Catherine Midicis naming a man from Florence as the person who made a wax image with hostile intent against King Charles IX, in 1574. The Queen complained that he had given the wax figure blows on the head and then inquired whether the king was vomiting or bleeding yet, and had he any head pain. He was arrested the next day. One month later the king died from a mysterious consumption – he had been fatally enchanted by sorcerers that melted waxen images of him, ebbing the life of the king away each time it was done.

Another historic event involved the English Court. One morning in 1560 Dr. John Dee was summoned with great urgency. A waxen image of Queen Elizabeth with a large pin stuck into the breast had been discovered at Lincoln’s Inn Field. An astrologer was consulted immediately. It took much reassuring before the deeply superstitious Queen was relieved of her fears.

There were three instances of Death Spells which are among the oldest known in history. One, in the 10th century, involved the King of Scotland. In 1304 one was cast on Queen Blanche of Navarre. The last was in 1333 when Robert III tried to kill King Philippe VI of France. There had been a feud between them over property and hatred grew. A Death Spell was cast upon the king, the queen, and their son Jean. The secret was revealed and blunders resulted and the King of England, Edward III, was urged to take the title of King of France. This little known occult episode was a major factor in the Hundred Years War.

Preserved wax figures, stuck through with pins used for casting Death Spells, are preserved and on display in certain museums. Few other examples of this gruesome and terrifying art of sorcery exist. That human nature can be obsessed with inflicting suffering and death on someone is evident still, the media and literary industries are quite profitable from producing fictional cases of terror and fright. Sex and violence is not a new industry.

Love and Death. The two most powerful forces in humanity.