The Gavel in Prehistory 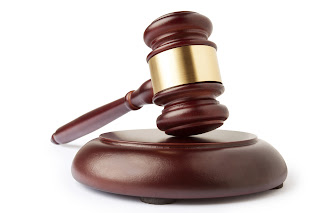 The gavel. It connotes authority, begins and ends meetings, seats people in the courthouse, and its loud raps punctuate the proceedings in Masonic Lodges. One rap, two raps, three. Sit, stand, and all rise. A symbol of power and leadership, the gavel has a long, prestigious – and practical – history.

Information about the origin of the word “gavel” is nonexistent. It was not known and no one looked, until now. Tracing the development of the gavel was the key. Decoding the origin of the gavel as a symbol has revealed its etymological roots – it originates from the verb phrase “to go.” It is a call to action. It all began with a mallet.

The mallet was a tool used by the Vanir megalith astronomers in the creation of a standard length of measure, so necessary in the building of an intercontinental utility of megalithic observatories. They had to be absolutely exact. It was all done with a pendulum and a star. Counting the swings of the pendulum between one siting of a star as it moved past a marker, to when it passed another marker a short distance away would prove the length of the pendulum cord; this was the standard length that eventually became known as the megalithic yard. The whack of the mallet signaled when to start, and when to stop the swing.

A mallet was also used to pound pegs into the ground in the geometric formations necessary to divide a circle; necessary to lay out the megalith, sometimes over great distances. Knowledge of how to place the pegs and how to divide the circle was rare. Those who could do it were powerful - they had the knowledge, and they developed the tools.

Division of a circle into five, six, and seven equal parts was of paramount importance in preparing calendars which included both solar and lunar sequences. Discovery of the Venus clock by the Merovingian Vanir ladies suddenly made it possible. Patterns were created with string, around pegs in the ground. The “Whack!” of the mallet became a signal for “get with it,” “go to work!” “stretch the cord around the pegs!” One peg in the center of a large circle became a teaching aid for memorizing geometric patterns by dancing around the circumpunct with cords, as today we do around the Maypole. When the Maypole dance is completed, the knotted ribbons express mathematical formulas that were known to the Vanir.

These knots are told of in an old Spanish Maypole song from 4800 BC:

The Vanir knew: Site north in the night sky, whack a stick into the ground with a mallet, then whack in a second stick, so the line between them points north (toward true north in the sky). Then, during the day, it’s noon when the first stick’s shadow points toward the second stick – a solar noon-stick which points to true north, mother Earth’s axis mundi, inertial north. Whack! Set up a third – a moon-stick to time the months and seven day weeks.

It is held that in 215 BC Archimedes accurately trisected angles using neusis (a marked straight edge) to find geometric means. However, the technique is millennium older. In 9500 BC a cord “neusis-marked” with knots, stretched straight, served as a ruler. Megalith astronomers knew how to accurately trisect and quinti-sect angles and how to divide a circle into three, five, and seven equal parts. The lore-like science was passed on through schools of the Vanir to megalithic voyagers, megalith salt-line (ley-line) surveyors, Tuatha de Danann, Druids, Merovingians, Templars, and then the knowledge was suppressed – yet maintained as Mason’s lore.

Whack! Hammer in a peg, attach a cord, and draw a circle. The sound resounds through the corridors of history to our ears today.

Thump! In 6000 BC, pound in a peg at Brittany. Thump! Now at Goseck, 4800 BC. By 3000 BC, the mallet sounds Clonk! on a wooden board, and Boom! a drumstick begins the Maypole dance. Whack! 2013 AD - the gavel calls and a Master Mason steps forward, carrying the Rod and Cord.
You “Whack.” It’s a verb. Do it with a gavel. How wonderfully Masons, and those who preceded them for thousands of years, kept for all humanity the traditions of history and science, kept them as a framework for truth. They are preserved on the Entered Apprentice tracing board, instructive to this day; history and tradition delightfully told. Look at the black and white checkered floor. Properly understood, it counts a day’s seconds, minutes, and hours as the shadows from three pillars fall across it. 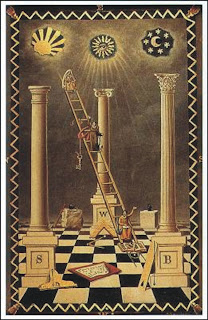 The same geometrics are expressed by circumambulating the star on the floor of an Eastern Star chapter room; ceremonies around a star which symbolizes the planet Venus. The pentagon in the center is a later development. Draft a triangle, a pentacle within, a pentagon within that.

Venus moves in a series of eight year cycles making a five pointed star. Whack! the pegs into the ground, stretch the cord around them to make a star. The “star” – really a planet – is a highly accurate clock, a way of clocking that could only be approximated thousands of years before the Vanir, using stars and the shadows of sundials, obelisks, and pillars. Venus times to the split-second long term cycles: days, weeks, months, years, centuries. The tradition, science, and ethics there-from are extraordinary and timelessly valid.

The gavel whacks three times and all rise. Whack! It calls again and we walk a ceremonial circumpunct. Thump! Begin the dance. It is a dance to the beauty of the world and to the goodness of its people.