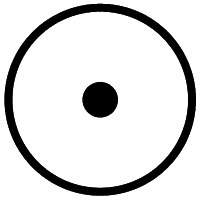 For accurate observation, you must be in the center of the circle, because the world is round. - from the Enzmann Archives.

"Circumpunct" means "encircled dot." "Circum" in Latin means "around." "Punct" in German can mean either "a dot in a circle," or "a point along a trail," or both. The image is a timeless Masonic symbol that reveals and dates a prehistoric discovery and marks the regions where it was used. The discovery was made and used around the Rhone, Loir, and Rhine Rivers, and in Southern England. It created a quantum leap in the astronomical observations of the time.

This familiar symbol denotes the discovery and application of 'occultation'; a word meaning 'the interruption of light from a celestial body'. It was done with a plumb-bob to provide a vertical, and a level string crossing it horizontally. The plumb-bob gives perfect vertical, and at the point where it crosses the horizontal string (+) it is used to measure the passing of a star behind it - and is acutely accurate. The circumpunct symbolizes this measuring process, and where the symbol appears it reveals and dates one of a number of advances in proto-historic knowledge and technology. This process advanced most everything we do so vigorously that it compares with the advent of transistors, which led to today's cell phones.
'Points along the trail' of observation methods leading to the circumpunct are found in some stunning images:

(A noon-stick is used to determine the meridian of the sun and the four directions: Site north in the night sky, whack a stick into the ground, then position a second stick between the first and north, so the line between them points north. During the day, it indicates noon when the first stick’s shadow points toward the second stick – a solar noon-stick points to true north, mother Earth’s axis mundi; inertial north.)

Points along the trail of the circumpunct manifest include:

One of the earliest uses of the circumpunct symbol is at the Loughcrew Giant Megalith, where it depicts the high accuracy of azimuth measured by occultation. Here, imaged with other astronomical and calendric symbols, it stands not just for the sun, but any celestial object measured in this manner - using a plumb-bob and a string. We have included some translations of the symbols on Loughcrew, 3200 BC, for your enjoyment. 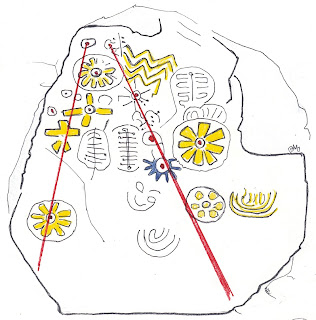 We note that occultation is so accurate, technical modifications of it (crosshairs in a telescope site, improvement of a plumb-bob, and a string) used by today's astronomers reveal planets orbiting distant stars. The circumpunct is an ancient symbol of this accuracy.

Like most symbols from prehistory, the circumpunct has gathered layers of meaning over time. It has become a symbol for the solar orb and the universe, megalith observatories, Kether of the Sephirot, sun-gods such as Ra, gold, the sun, the eye, spirit or inner man, the Unmoved Mover, the Eye of God, the center, the beginning, and many more. Masons use this symbol to represent living a circumscribed life, and sometimes it is imaged with a vertical line on each side. Position the lines at top and bottom and they represent the extremes of the sun's analemma at Cancer and Capricorn; the lines representing these extremes also impart to us wisdom about our lives that like the sun, we must live within limits, circumscribed by the boundaries of good judgment and wisdom.