The Fine Arts of Divination

Divination: the act of foretelling the future, often by interpreting omens. Among the many forms of divination are predictions based on the symbols of Tarot cards, the fall of dice, yarrow sticks, or colored beans, the configuration of such natural phenomena as clouds or wind, and the movement of birds or other living creatures. – Watkins Dictionary of Magic

Divination is so called because it is considered a gift of the divine – a gift from the gods. It is the art of foretelling the future, using omens, portents, visions, and divinatory tools… Divination has, for thousands of years, been a tool of priests, seers, shamans, astrologers, medicine men, Gypsies, and wise men and women. – The Witch Book

People of every age are preoccupied with knowing the future. Perhaps we should consider that many would be fearful of our futures should we know them, and that Mother Nature has screened the future from our eyes for our benefit; still, we entertain the idea that we would be at some great advantage over others if we could just lift the veil and peek in.

This fascination has driven the development of divinatory arts. Some are more familiar, like astrology and cartomancy,  and some not – like lampadomancy. Minor divinatory methods can be found throughout the centuries, invented by no-one knows who, born of human ingenuity. We will leave the major divination arts to later posts, and discuss here the odd world of minor methods.
Some methods are not very attractive sounding. Romans practiced haruspicy; the inspection of the entrails of slaughtered animals. They also roasted the shoulder of a sheep, examining the cracks in the bones, and interpreting them for any messages. Oddly, Christians preserved these practices until the eleventh century. Another method survived longer, stichomancy – done by opening a book randomly and interpreting the first words on the page in a prophetic manner. Use of this method using the Bible resulted in the phrase “sortes sanctorum,” or “lots of the saints.”

A form of divination still used in some French provinces is one of the most perplexing methods of the art to be used. Coscinomancy uses a balanced, spinning sieve. It must be done with the sieve held in the appropriate manner, just so. “Spinning the sas” refers to this method, sas being an old word for sieve or strainer.
Notably, every culture ascribes divinatory powers to objects in rotation. Gyratory movement is most mysterious, even diabolic to some. From this action we get “spin the bottle,” the roulette wheel, and the Wheel of Fortune, made popular by the game show. Most mysterious, baffling the most brilliant minds, is the gyroscope; it is a representation of the movement of planets.

Along with rotation, the four elements each have a mode of divination. Pyromancy, or pyroscopy is divination by fire, where certain objects – chiefly pounded, crushed peas – are thrown in the fire and their manner of burning is observed. Aeromancy is divination by examining variations and phenomena of air. Hydromancy - or hydatoscopy if rain water is used, pegomancy if spring water - is comprised of many different methods. One might study the ripples that form when three little pebbles are dropped into still water, or drop oil on the water and see future events as in a mirror. Geomancy, divination by earth, was also known as the Art of the Little Dots, which at one time was confused with cartomancy. One might throw a handful of earth on the ground and examine the figure it forms, or even place random dots on a piece of paper, interpreting their position. Lecanomancy is performed by dropping precious stones into water: a mysterious whistling sound results which announces the thing desired. 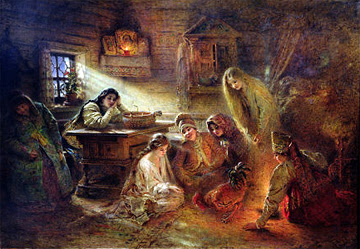 Aleuromancy and alphitomancy require cakes made of wheat or barley flour; these cannot be swallowed by a guilty person. One famous, very old method is alectoromancy, or alectryomancy, which is divination by a cock: grains of corn are placed on the letters of the alphabet which divides a circle, and as the cock pecks at the corn, the letters are noted and interpreted.

Axinomancy is divination by a hatchet struck into a round stake; the quivers of the handle are interpreted. Cephatomancy is divination by a donkey’s head. Cromniomancy consists of writing names on onions that are then planted; the one that sprouts first indicates what is required. Dactylomancy is performed with rings on the fingernails. Daphnomancy uses a branch of Laurel, which announces a fortunate event if it crackles when burned.

Astragalomancy, or astragyromancy, was performed among the ancients with knucklebones upon which the alphabet was marked. Dice were later substituted with numbers 1 – 12 on them representing the twelve divisions of human language. A divination art based on the movement of flame in a lamp is called lampadomancy. Libanomancy requires smoke or incense, and lithomancy uses precious stones. A very curious art is margaritomancy, divination by pearl. The pearl is to be enchanted and shut in a pot. If a guilty name is said the pearl will leap, striking the side of the pot. Molybdomancy requires melted lead to be dropped in water, and the hissing is interpreted.

A key, suspended by a thread from the nail of a young virgin, is called cleidomancy. A verse from Psalms is repeated, and the key revolves if the query can be affirmed. Belomancy was a favorite of soldiers, using arrows. Onychomancy reads the sun’s reflection from nails, and oinomancy is divination by wine. Ovomancy has to do with the germ of an egg being the divining agent, and ornithomancy, or oniscopy, was an ancient art, divining by the flight of passing birds. This was practiced in Rome. Straws are used in sideromancy; an odd number are thrown upon a red hot iron, and while they burn, judgment is formed from the movement, twisting and bending of the straws, the sparkling of the flames, and the behavior of the smoke.

Mirrors have a special place in magic, and they are important in divination. Catoptromancy, or crystallomancy, is performed with a magic mirror or lens. It is one of the most ancient forms of divination. Legend says it came from Persia, where in the temple of Ceres, a spring was consulted by means of a mirror with a thread fastened to it. The thread was immersed in the water, and the diviner saw in the mirror whether sick persons were to be cured. Pythagoras had a magic mirror which he held up to the moon, imitating the Thessalian sorcerers who had used this method from remotest antiquity. Magic mirrors are mentioned by Spartianus, Apuleius, Pausanias, and St. Augustine. In the twelfth century these practitioners were called speculatorii.

Magic mirrors also appear in fairy tales like Snow White, a story that has its roots in cultures of prehistory. When the elements of the divinatory art and the elements of the fairy tales are compared, we can trace them to a common origin with the people who built the megaliths, named the days of the week, and discovered the Venus clock. It is likely that the ancient art of divination using mirrors, thread, and water began with the Vanir astronomers of the Atlantic period – 5000 BC – evolving from methods by which they read the stars to construct calendars (which predict the future); water created a level horizon, and thread was both used in plumb bobs for vertical, and vertically as a cross-hair, and where they intersected would pinpoint a heavenly location. Duncan-Enzmann has decoded these and many other symbols, myths, and legends that started with the megalith mariners.

The use of a magic mirror is the opposite of necromancy; here mortals who don’t yet exist are made to appear in the mirror, or if they do exist, are seen doing something that will not take place until later. The manner of using the magic mirror is very simple, but documents or illustrations about it are exceedingly rare. Both illustrations below of mirror diviners may have alchemistic meaning, suggested by the hieroglyphs and style of presentation.

In England, practitioners refer to themselves as crystal-gazers and use an egg-shaped crystal, or even simpler, they place a bright sixpence into the bottom of a glass of water and gaze upon it. Crystal balls are also used for gazing and have been for centuries, perhaps longer. A perfectly round, clear crystal is a wonder to behold, and even small ones are expensive. Gazing into a crystal ball is said to reveal the past and the future, as well as secret events, or hidden characteristics. After concentrated and focused observation, colored clouds appear to the viewer and are interpreted to answer questions. Rising clouds are seen as a positive answer, sinking ones are a no. Color is important; black is not favorable, whereas white denotes success. Yellow is unpleasant, orange is disappointment, red is illness, or trouble, blue and green bring pleasant surprises.

A divinatory method related to the magic mirror, hydromancy, and oinomancy is the Three Vases of Artephius. One made of earthenware contains oil of myrrh, one of green earthenware contains wine, and the third of white earthenware contains water; or the second and third could be copper and glass. According to an old diagram, a candle and a cloth are necessary, and a wand of polar-wood half peeled of bark, a bright knife, and a pumpkin root.

Hydromancy gave birth to the celebrated process of divination by coffee-grounds. This cannot be any older than the introduction of coffee to Europe or Italy. When coffee dregs are poured out onto a white plate and the liquid carefully drained, patterns are left behind which are interpreted. Circles mean money and predict wealth. A crown means State success, a diamond good fortune in love, and if you see a number you should certainly play the lottery with it. The three formulas borrowed from the language of demons must be spoken at the right times during the process.

There are many more minor methods of divining. Of great interest would be the processes known as Cabbalistic, used much in the eighteenth century. Casanova knew how to benefit from them, if his memoirs are to be believed. These arts consist of divining by forming numerical combinations, some of which are extraordinarily complicated. There is a book called La Clef d’Or, ou l’Astrologue fortune devin, traduit de l’Italien d’Albumazzar de Carpentari, par M. Peregrinus. The author must have been a great humanitarian - winning at lotteries by guessing the number to be drawn is one benefit. Considering that we still draw lotteries today and we have computers to help us with formulas and math, it would seem a good art to learn. Numerology tries to foretell a person’s character and future using their birth date, and is also a study of the Hebrew alphabet, where each letter is also a number.

Michelle is a professor of mythology and symbolism, fairy tale author, blogger, and geek. She earned her post-graduate degree at the University of Wales decoding prehistoric images, working closely with Duncan-Enzmann. She is also a publisher, artist, and teacher. Her artwork, inspired by her love of symbolism and folklore, has appeared in galleries from Massachusetts to California. Michelle is co-owner of White Knight Studio.
Books by Michelle, available at Amazon: