Who's Line is it Anyway - the art of metoposcopy 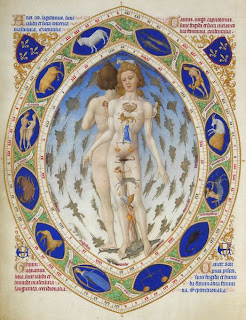 Beginning in prehistory, astrology has made it possible to glimpse the character and future of a person. Since then, a number of sciences, both of psychological and divinatory methods, are based on astrology’s relationship to the Microcosm. Some arts are based on the stars positions at the time of birth, some on the physical attributes of the person’s physicality after birth. Cheiromancy, or palm-reading, is perhaps one of the most familiar.

The Zodiacal Man is a familiar chart showing the astrological associations of heavenly constellations to the human body. In the 1600’s, Jerome Cardan established an inevitable relationship between astrology and metoposcopy; a localization of the planets on the forehead similar to that found by astrologers of the relationship of planets to the body, the head, and the hands. The human head naturally attracts the attention of observers, and possesses a planetary scheme of its own. 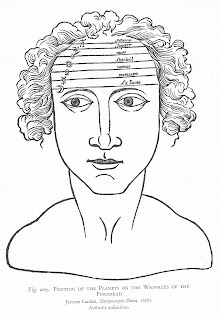 Although the study of the lines on the face is more easily accomplished than interpreting those of the hands, metoposcopy was unknown before a publication by Cardan. His splendid Latin work, Metoposcopia, published in Paris in 1658, was translated into French that year. In 1663 his complete works were published, but did not contain Metoposcopia; a work now nearly impossible to find. This science ought to have been more popular than cheiromancy, if only that study of the hand requires the observed to be a consenting party, where the study of the lines on someone’s forehead can be done without their knowledge. Despite the potentially easy access of subjects, neither male nor female soothsayers put metoposcopy into practice.

In theory there are seven lines on the forehead. Reading upward from the nose, they belong to the Moon, Mercury, Venus, the Sun, Mars, Jupiter, and Saturn. Not all these lines are evident on one forehead as there is simply not enough room for them all on any one subject. The type of line and its juxtaposition to other lines and marks determines the character etched onto the human face.

Long and perfectly straight lines indicate justice and simplicity of soul, whatever the planets are that they belong to. Various character traits are shown by wavy, streaky, or broken lines. Vertical wrinkles may form angles with the main lines resulting in an infinite number of combinations. A man marked with x’s, as in figure 28,  will, according to Cardan, be dissolute, untruthful, and unprincipled. He will fall quite low into lustfulness, and come to extreme poverty from wealth.

Figure 29 shows a little line crossing the long Mars line, indication the person is in peril of a violent death from poison, steel, fire, or the plots of women. On figure 90 is shown a line of Venus “like a wave of the sea” which indicates the person will travel, and die, upon the sea. A person smiling, a commercial traveler as figure 17, because of the odd lines on his forehead, will bring lawsuits and stubborn prosecution against his family. Figure 19, an inoffensive young man, will be the worst of usurers and die an infamous death. Woman may also very easily be read by Cardan’s science. Three lines indicate a woman who is generous and full of forbearance. A young person with a sinuous line is full of compassion. Virtue is indicated by two slanted sinuous lines. 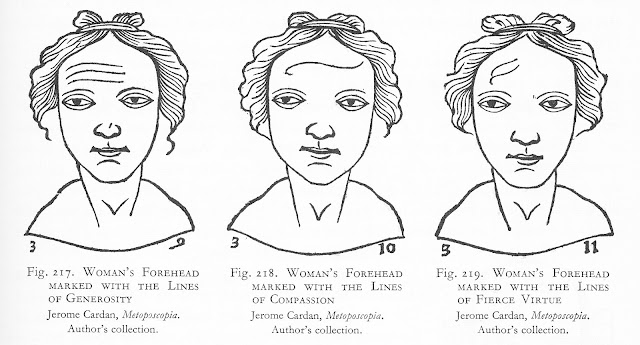 Cardan’s science includes classifications which are made by combinations of lines with facial marks and spots, or Navi. The Navi are not connected to the planets as wrinkles are, but with the twelve signs of the zodiac, which a complete astrological system requires. The Ram, Bull, and Twins may be on the upper part of the forehead, the Crab, Lion, and Virgin lower down the face. Near the ear, and down the cheek are the Archer, Goat, Water-bearer, and Fishes. A special Navus is on the cheek, related to Saturn, which means something different if on the right or on the left. 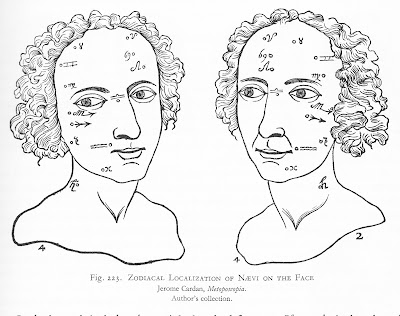 Cardan’s work includes about 800 figures. If we consider these to be the result of observation of nature – not the product of his theories and imagination – we are in the presence of an impressive monument of patience, intelligence, and discernment, and it would be desirable and beneficial to verify its accuracy and precision. Then, there would indeed be repute and profit for any astrologer who chose to practice metoposcopy.