The Wisdom of the Bee 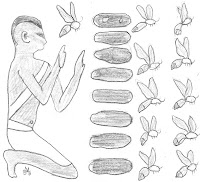 Bee keeping is a prehistoric activity. In Spain, depicted on a wall, is an image of a human collecting honey, ca. 15,000 BC. In Egypt there is an image of a beekeeper that dates to 1300 BC. Bee symbolism was associated with kings until the discovery that the king-bee was a queen, after which bees became linked to the Great Goddess, representing communal and mutual support, as well as fertility. A beehive displays an industrious gathering of workers, who toil with seemingly endless energy. The bee’s wings and their ability to distill heavenly honey from the fragrance of flowers contribute a spiritual dimension to the bee’s symbolism. Honey is sweet yet beneficial, a healer of wounds, and is associated with ambrosia, the food of gods. In Ireland bees produce the honey from which mead (the drink of immortality) is made, and are protected by law. To the Celts, the bee represents secret wisdom from the otherworld, and Celts refresh themselves with honey-sweetened wine. In Greek mythology bees are connected to Zeus, who was born in a cave sacred to bees and was nourished by honey.

Bees are associated with priestesses, prophets, poets, and philosophers: the spiritual associations with bees link them to purity, inspiration, eloquence, and intellect. One legend tells of bees alighting on the lips of babes, granting gifts of eloquence and poetry to Pindar, Plato, Sappho, and St. Ambrose. Christianity considers that bees embody a spark of divine intelligence, imparting symbolic property to the buzz, or song, of the bees. The bee’s honey and song represent Christ’s sweetness and pain, mercy and judgment. Here, the bee symbolizes the Christian, the hive represents the Church.

Bees are disciplined, and they collectively ensure the survival of their species, and thus symbolize the survival of the human soul. An individual bee symbolizes the quickening power between heaven and earth. Carved on tombs, bees signify immortality. Because bees disappear for three months of winter only to reappear in spring, they have become a symbol of resurrection. Plato declares that the souls of the dead are resurrected as bees. The Path of the Bees, a German expression,  refers to the “wind” that carries the souls.

In antiquity the Great Mother was also known as the Queen Bee; at Eleusis and Ephesus her priestesses were called bees. Given the long history of feminine association, it is reasonable to conclude that the bee was later used as a cryptic symbol for those who still worshipped the Great Goddess during the time when the Church suppressed such ideas. Charlemagne had bees embroidered on his royal robes. Napoleon also had bees on his robes, symbolizing cooperation and prosperity. 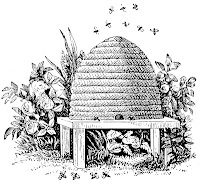 Bees are found in Masonic Symbolism. In The Encyclopedia of Freemasonry (1917), Albert Mackey writes: “The bee was among the Egyptians the symbol of an obedient people, because, says Horapollos, of all animals, the bee alone had a king.” He goes on to explain that Freemasonry has adopted the beehive as an emblem of systematized industry. One could reflect upon this statement, considering that the bee does not have a king, but a queen who governs the hive. In Proverbs 6 it is written that we should “go to the bee, and learn how diligent she is, and what a noble work she produces: whose labor kings and private men use for their health. She is desired and honored by all, and, though weak in strength, yet since she values wisdom, she prevails.” Of these verses Charles Hunt states: “Here the bee is a symbol of female wisdom and the virtue of noble work” (Masonic Symbolism, 1939).  As we trace this symbol to its origin, it is associated with the activities and virtues of females, the goddesses and priestesses of antiquity, and Wisdom of the scriptures (also female). Given these historic uses, it is likely that the bee is indeed a symbol of the female, and perhaps in Masonic use, the Order of the Eastern Star.