Secrets of the Mermaids


The Little Mermaid, Maxwell Ashby Armfield, 1913
Great stories of ancient seafaring people are told all around the world. Along with them, legends about mermaids have been told throughout the ages; folklore is replete with mer-people. A story from 1430 AD tells of two young girls who saved a mermaid and took her home. The amazing mer-woman, who spun and wove with great skill, is a reference to the spinsters of 12,500 BC. The Rime of the Ancient Mariner, written in 1797 by Samuel Taylor Coleridge, is a modern example of literature based on our ancient ancestors of the sea. Another well-known story is The Little Mermaid, a film by Walt Disney which has all the classic elements of mermaid legends.

Like other children’s story characters, mermaids have roots in ancient history. There are many details about them which help us trace their origin. Their hair color ranges from silver-blonde, to light brown, to strawberry blonde, and they are described as having green or blue-green eyes. These factors indicate they are likely descendants of the Indo-European Maglemosians, ancestors of the Fair Folk, later called Fairies. According to Duncan-Enzmann, The Little Mermaid as made popular by Hans Christian Anderson in 1873 is a fairy tale that originated in a culture of prehistoric mariners, during the Neanderthal wars of 42,000 BC. He describes these stories as tales of tremendous courage – accounts of adults sacrificing themselves to protect their children.

Mermaid means sea-maid or sea-woman, and could be derived from French or German for “sea” or Saxon for “merry maid.” Merpeople are evident in early religions of the world. The Philistine god Dagon from 2500 BC, (Dag = fish, oan = noah), and the Syrian god Atargis were images of gods that were half man and half fish. In Syria they are called Kukullu, which means fish-man. These fish-men also show up in Mesopotamian and Babylonian history; the fish-god Oannes was a Babylonian god who lived at sea and instructed art and agriculture on land by day. Sumerians and Assyrians depicted bearded human figures with a fish-body hanging off their heads, down their backs to their toes like a cape. Merpeople images and sculptures are found in Assyrian, Babylonian, and Mesopotamian art and temples.
Folklore of sea dwelling people is found all around the world, and have a variety of names and descriptions. Hispanic folklore describes water maidens as small human-shaped beings with stars on their heads and golden hair. The star alludes to their mastery of astronomy, and their golden hair is symbolic of the sun. In Polynesian symbolism fish-people are divided vertically. Native Americans have a legend of a fish-man with green hair who led them from a land where they were starving to the North American continent. Mermen have green hair in Greek mythology. In Japan the sea maids are known as ninayo: mermaids who ward off bad luck and protect the land with peace. To the Germans the mermaid was the Lorelei (meriminni); in Iceland, the marmell. Denmark had the maremind, India the matsyranaris. Mer-people appear to be distant relatives of the Nereids of the Mediterranean. Their legends are found in vast numbers along the coasts of the Atlantic – at the west coast of Cornwall, the coast of the British Isles, northern Scotland, and the fjords of Scandinavia and Ireland. Some say these images represent pagans banished by Saint Patrick. They are connected with Saint Margaret, who triumphed over the sea, and Aphrodite and Mirlan - both born of the sea.

Mer-people speak their own language, but also speak the language of land-dwellers. They have the ability to change their tails into legs to visit land. One Syrian story records that if a merman and a human wife have a baby, the child will know the language of both the Earth and Sea – of farming and navigation – not unlike children born into a multi-lingual household who grow up speaking more than one language. 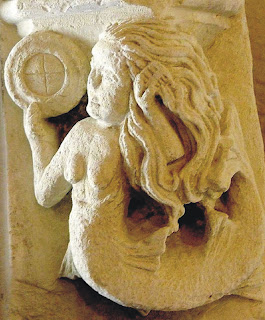 Images of mermaids tell us much about them. The Loudun mermaid (left) holds what could be construed as a mirror, as is common with mermaid lore. Looking more closely, one can see the cross symbol of direction within it, suggesting it is more likely a lens, indicating astronomical mastery. The “comb” also common in mermaid and siren imagery is a calendric (Duncan-Enzmann).

If a mermaid or merman is discovered and caught, legend says that by obtaining an object belonging to them, one can keep them from returning to the sea until the object, a coveted prize, is returned or retrieved. Mermaids are described as living underwater in riches and splendor. Mermaids and mermen are associated widely with things of the sea and they are linked to the sea and its behavior. Related to elementals and water spirits, they appear before storms and disasters strike, or can raise a tempest. They also gather the souls of the dead, keeping them in underwater cages. Legends say that they wreck enemy ships if one of their own kind is wounded, boarding the vessels at night, and weighing the ships down, so that they sink. In Greenland, they are associated with the Kraken. Mer-people are not found only in the ocean; they can penetrate streams and fresh water lakes, and reside near sacred fountains.

The skill to accurately predict astronomical events using charts and algorithms which the average person could not understand gave merpeople the reputation of being magical. Some mer-people were caught and held for ransom: Their wisdom and their knowledge of astronomy and natural science were unsurpassed, and it was this knowledge and wisdom that was of such great value. Knowledge associated with navigation such as astronomy, longitude, currents, and mapping was kept secret. Although captured mer-people could not refuse to keep a bargain, they were considered tricky and dangerous to deal with. 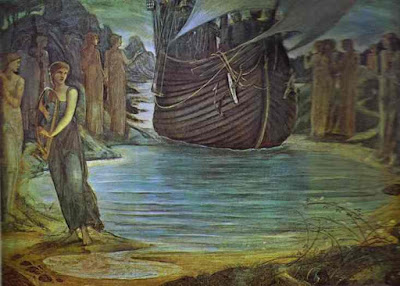 Mer-people generally kept to the sea. Mermen rarely married mortal women, and when they did, they took their wives from land to the sea. Some mermaids fell in love with human males, who, then enchanted, did whatever they could to marry the beautiful creatures.

Sirens are mermaids with two tails. They are great musicians, singers, and dancers, who embody the power of song-magic: A rude sea grows civil when they sing. Legends associate them with fatal attraction – they can lure a young man to his death by singing him to sleep. A siren will kidnap an enchanted man for love; she may live with him forever, or she might kill him. 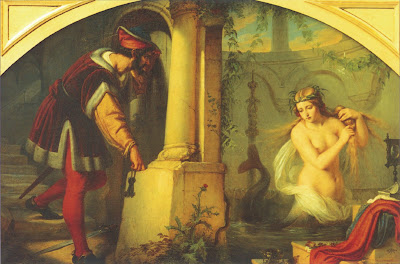 Many legends and historic accounts tell of the siren Fairy queen Melucine (or Melusine), who lived around 400 AD. She was the daughter of Fairy Queen Pressyne and King Elynas, king of Albania. Her father treated Pressyne badly and also imprisoned Melucine. History and legend are entangled and records differ, but some indicate that Melucine later fell in love with a mortal and lived with him for a while on land. As a result of this she turned into a serpent every Saturday, or in some tales she became a fish-woman. She agreed to marry her lover on one condition; that he would promise never to see her on that day. In his curiosity, or perhaps out of suspicion, the careless husband was caught breaking the contract and Melucine returned to the sea, leaving him and her children on land. In spite of the scandal and mystery surrounding the famous siren, many monarchies go to great lengths and expense to have their genealogies traced to her family.

These elusive creatures are associated with water, and today symbolize the unconscious, wisdom, and lymphatic temperament. Mermaids are popular today in the world of art and fashion design, and the hunt goes on for proof of their existence.