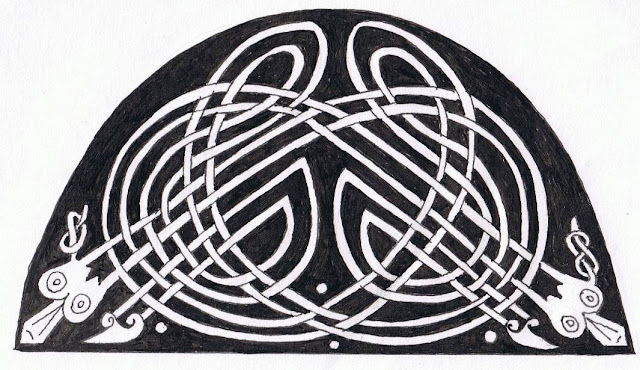 Copied from the Book of Kells, M. Snyder

This design from the Book of Kells depicts megalithic mathematics. The left indicates winter, the right summer. The outer dots represent the equinox, the upper center dot June or spring, the lower center dot autumn.

The knot on the left equals the number five, representing the pentagram. This is a pattern that can be accomplished by carefully tying a paper strip into a knot.

The knot on the right represents seven, or a seven-pointed star, accomplished by tying a paper strip into two knots.

These designs are associated with the Gorgons from the Bay of Biscay in Ireland, who are depicted with knotted, intertwining snakes on their heads, which image the mathematics of seasons, functioning like a calendar (Duncan-Enzmann). In contemporary mythology, Gorgons are described as monstrous beings, both deadly and cruel. Historically, they were navigators for megalithic mariners. 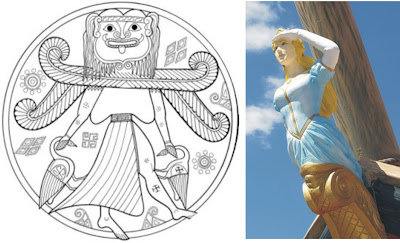 The symbols imaged with this Gorgon, an emblem on a plate from Rhodos, 500 BC, are astronomical and testify to the ancient knowledge of navigation the Gorgons mastered: the lozenge (indicates latitudinal location; the lozenge shadow changes shape in different locations), the Tau (symbolizing measurement of the elevation of stars), and the swastika (symbol of atmospheric vectors, oceanic gyres, and movement of time). This is a navigational calendric. The Gorgon navigators were mostly women, thus the tradition of female figureheads on ships.

Gorgons are depicted with snakes on their heads, or sometimes with cauldrons which symbolize that these skilled navigators were also good cooks. Images like these begin the practice of imaging 'things on heads', such as serpents on the heads of the Pharaohs. The Vanir megalithic mariners were the first inhabitants of what is now Egypt, evidenced in images of the early Egyptian culture Zep Tepi, which means ‘first’.