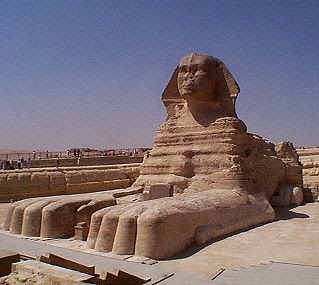 Most everyone is familiar with the Egyptian Sphinx at Giza, towering over the sandy landscape, facing the rising sun. Its animal form, the lion, has long been a symbol associated with the sun. The Giza sphinx is carved out of bedrock and is the largest single-stone sculpted statue in the world. Perhaps as long as ago ca. 9000 BC the great sculpture was part of a megalithic observatory. Four thousand years later, two pillars were placed in front of the sculpted monument to facilitate measuring the movement of stars and planets (the holes are still evident). An Egyptian Pharaoh had the sphinx’s head re-carved in his own image. For the Egyptians, sphinx statues represent kings or gods and are usually male; they are symbol of divine sovereignty.

The sphinx symbol has its origin in ancient astronomical observation. Thousands of years before it was sculpted, the great Sphinx was a yardung peak serving as a sundial. Later, it was sculpted into a symbol for an astronomical event in the Great Year. With a lion’s body and a woman’s head, this symbol suggests the relationship between Leo and Virgo. These two constellations appear together at the point where the sun’s path crosses the equator at the autumnal equinox of the Great Year - a 26,000 year cycle. (The zodiac wheel moves counter clockwise in the Great Year, Virgo preceding Leo.) 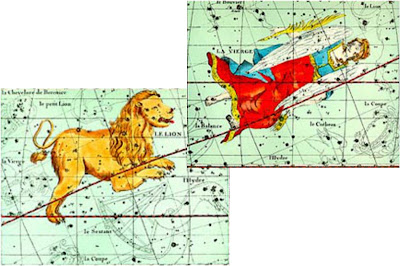 Greek sphinx statues are usually depicted as a winged lion with a woman's head, or a woman with the paws and claws of a lion, a serpent's tail, and eagle’s wings; wings often symbolize the movement of time. This feminine sphinx is usually seated upright, rather than horizontal, as the Giza Sphinx is. Variations of the sphinx are found in all parts of the ancient world, both sculpted and imaged. The watchful beast wards off evil, especially at temple entrances; sphinxes with animal heads or bodies often line the approaches to temples. These are majestic and magical beasts; some are guardians, and some are dangerous. Today they represent sacred and secret knowledge, an accurate evolution of meaning based on the ability of the megalithic mariners to read the Venus Clock and calculate longitude, a skill that was a closely guarded secret.


Oral tradition surrounding the sphinx is also found in many cultures. A Greek legend tells of a sphinx at the gate of Thebes who asked a riddle of anyone passing by. If they did not know the answer, she killed them. When King Oedipus answered correctly, she threw herself into the ocean. The riddle was said to be this: What walks on four legs in the morning, two legs in the afternoon, and three legs at night? (Answer: a human) This riddle suggests the cycle of life, and is also associated with Yggdrasil (Tree of Life) and the Phoenix. The sphinx, as an astronomical symbol of Leo and Virgo, also represents a life cycle as time repeats the patterns of the stars and planets. 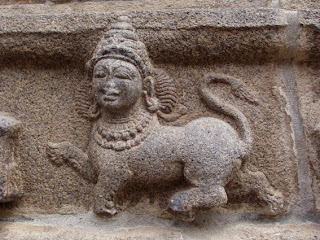 In art from ancient Greece the sphinx is a common motif, usually depicted winged and crowned. The modern interpretation is a transition to higher consciousness. In South India the sphinx is known as purushamriga meaning human-beast. It is found depicted in temples and palaces where it serves as protection from evil. At one temple in India two of these guardians sit on either side of the grand doorway, guarding the entrance. They are the divine beings, warding off evil and removing sins. They smile mysteriously. One is male, one is female; they have been seated side by side for many centuries.

In contemporary symbolism this fabulous creature symbolizes mystery, power, royal dignity, vigilance, strength, secrecy, silence, inscrutability, and the riddle of the Universe; also, divine and human wisdom, discernment, and temperance. Sounds just like what my cat thinks of herself.

A Tale of Three Kingdoms, book three The Lost Dragon
Posted by The Symbologist at 12:00 PM