Humans love patterns. We doodle patterns, buy patterns, wrap gifts in patterns, we even dance in patterns. Music and art, science and math, all have patterns. There are patterns in the tiniest things and in the expanse of the universe. Patterns are combinations of repeated shapes. The most perfect shapes are those of the golden mean, or golden ratio – a mathematical equation (1:1.618), a proportion which manifests throughout nature. Beautiful faces supposedly develop in accordance with this equation. Around the world and in every culture, assessments of beauty can be connected with the golden ratio. From prehistory this has been observed. Around 5000 BC, helen was a standard measurement of beauty: Helen of Troy was known as the woman whose face launched a thousand ships. A helen is an ancient term for the golden ratio.

The ancients believed that a profound order underlies the universe, harmony in number that is expressed in geometry. The golden ratio is the foundation of Sacred Geometry, a term which refers to philosophical beliefs based on it. In ancient Egypt these geometric shapes were considered sacred, and by 550 BC the golden ratio became a philosophy taught by Pythagoras as Sacred Geometry. The shapes of Sacred Geometry date to prehistory; abstract geometric symbols such as spirals, circles, and squares have been used since before the Paleolithic Period, ca. 12,500 BC. Although credited to Pythagoras, the 3-4-5 triangle was known and used ca. 6000 BC by megalithic Vanir astronomers.

Each shape represents a three dimensional form; circles represent spheres, squares are cubes. Sacred Geometry considers five perfect 3-dimensional forms - the tetrahedron, hexahedron, octahedron, dodecahedron, and icosahedrons, known as the Platonic Solids. Mystery cults in ancient Greece taught that these shapes represent the essential structure of the universe. Pythagoras once said: "Number is the ruler of forms and ideas, and the cause of gods and demons.” He considered geometry to be the highest form of knowledge and the key to higher mysteries. Our ancient ancestors realized that there is dynamic mathematical relationship between beauty and truth. Artisans used the proportions and shapes of Sacred Geometry to express philosophical and theological ideas as forms of grace and beauty. The architects of classical Greece designed their buildings according to Sacred Geometry to enhance a sense of tranquility and enlightenment. 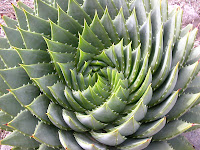 Spirals, circles, and squares are basic shapes in Sacred Geometry. Spirals are found on megaliths such as Newgrange, and are associated with seasons, the cycle of birth, growth, and death. Jung considered them an archetypal symbol for cosmic forces. In cartoons spirals are used to indicate dizziness or hypnotism. Squares symbolize uprightness, honesty, and dependability; in fine art squares represent stability, and regulated life and actions. Masons ten thousand years ago knew the principles of geometry and used squaring tools in the construction of megalithic observatories to insure stable foundations. One of the oldest human-made symbols, circles symbolize the sun, infinity, inclusion, perfection, and centering. The Yogis and Priests of early Hinduism marked a circle around themselves as they knelt to pray; the circle represented the surrounding horizon. Sitting in the center of the circle they became associated with the center of the world, a place of stillness and peace. The Whirling Dervish priests dance in circles to “remember God.”


Sacred Geometry also plays a role in symbol design. Some images have design elements which act as a blueprint beneath the rendered image, so that not all information or meaning of a symbolic emblem is readily visible. For example, an alchemical symbol of a tree with a bird on either side, reflecting the shape of a cross, adds symbolism of the cross to the meaning of the birds and the tree. Renaissance masters used the golden rectangle to design their paintings. These geometric elements contribute balance, proportion, harmony, and meaning to the complete work. 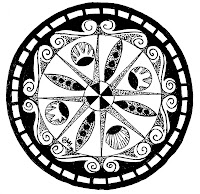 Mandalas are designs, usually circular, that use the shapes of the golden ratio in concentric layers. These patterns of shape and color elegantly express Sacred Geometry. In Tibet and India mandalas are sacred works of art which function as meditative focus: by moving the eyes watchfully from the perimeter toward the center, the seeker becomes more centered. Theoretically, through the study of symbols, designs and patterns we can access knowledge contained in our genetic memory. Archetypal shapes reach deep into the unconscious and affect the observer, opening the heart and mind to conscious evolution through geometric models. Like all archetypal images, the geometric shapes of mandalas are powerful because they are perceived by the subconscious mind, bypassing the rational processes of thinking. Holistic healers, physical therapists, and other professionals recognize the centering and healing aspects of these designs, and hang them in treatment rooms. Carl Jung had his patients create their own personal mandalas to help them become more centered emotionally and mentally. The next time you’re feeling a little blue, create one of your own: an absorbing and centering task you may find fun!