Like many words that have ancient etymology, most symbols have their roots in antiquity. One such symbol is the ouroboros which dates back at least to 9000 BC. Ouroboros is Greek for tail-devourer. This image can be found in multiple symbol systems all over the world. The snake swallowing its own tail combines the symbolism of the circle and the serpent, and, like the Phoenix, represents life, death, and rebirth. The great serpent symbolizes the endless process of cyclical repetition.

In Egyptian iconography the self-sufficient serpent represents the path of sun, the circle of the universe. One image, dating to 1600 BC in Egypt, is the Chrysopoeia ouroboros of Cleopatra. The name indicates the attempts at creating gold, and indicates an advanced knowledge of natural science and the beginnings of alchemy. In alchemical emblems, the ouroboros symbolizes a closed cyclical process in which the heating, evaporation, cooling, and condensation of a liquid helps to refine or purify substances. Often there are two snakes, each biting the tail of the other. The upper one has wings to signify the more volatile substances, the lower has no wings to represent fixed elements.

The serpent (or pair of serpents) with tail in mouth communicates self-sufficiency: The creature begets, weds, impregnates, and slays itself with a power that continually consumes and renews. In every end is a new beginning. In some funerary art the ouroboros represents immortality, eternity, and wisdom. An illustration from 1571 shows an ouroboros with the Roman Saturn, a god of time. In Norse mythology, the serpent Jormungand  grew large enough to encircle the world and grasp its tail in its teeth. This ancient Norse serpent holding the universe together is a continually regenerating ouroboros. The tail-biting serpent is also found in Hindu mythology, circling the tortoise, which supports the four elephants that carry the world. The Great Serpent appears in alchemical, ancient Egyptian, Greek, and Gnostic texts, as well as Aztec iconography

An ancient depiction of the ouroboros has an inscription that reads: Hen to Pan, meaning The All Is One. Alpha and omega symbols are sometimes depicted with an ouroboros, both represent the beginning and end; the snake connects them together as it bites its tail. “Ashes to ashes, dust to dust,” is a saying derived from old English burial services, adapted from Genesis 3:19: "In the sweat of thy face shalt thou eat bread, till thou return unto the ground; for out of it wast thou taken: for dust thou art, and unto dust shalt thou return." The ouroboros symbolizes this concept very well, representing the natural cycles of life, as does Yggdrasil, the Norse Tree of Life, and the Kabala Tree of Life.

Like many ancient symbols, the ouroboros has collected layers of esoteric meaning. The never-ending serpent is apparently immobile, yet is in perpetual motion, recoiling on itself. The cyclical nature of this Great Serpent links it to the infinity sign, and to the perfect, never-ending circle which is the constraining factor in Sacred Geometry, as the ouroboros constrains the universe. The continuous movement of the serpent symbolizes well the flow of creation from chaos to order, to chaos again, and the background radiation which continually tumbles through the universe (Duncan-Enzmann). This Hubble image of Monocerotis (which actually means Unicorn) looks very much like the great ouroboros. 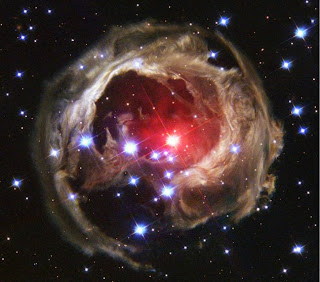