Message from A Grave

At the Cistercian Monastery in Cumberland Woods, RI.

David Brody, best selling author of Cabal of the Westford Knight and other publications, discovered this site when on an investigation of the area. Having many questions about it, he took a photograph. Symbologist Michelle Snyder and Dr. Robert Duncan-Enzmann studied the photo and have discovered that it is not an insignificant burial. 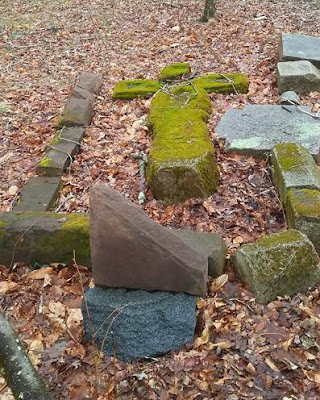 That this person was buried with the blessing of Christ is indicated by the moss-covered stones in a cross shape.

It is identified geographically by certain of the surrounding stones.

The pattern conveys that 'as it was here, so it will be there'.

The triangle and the blue circle have interesting significance. The circle represents the thing to be measured. The triangle indicates the way to measure it.: 3/5/7, Reiman (the square root of all numbers).

Reiman = measure by semi-neusis. Neusis measures any number.The arrangement at this grave indicates that the person buried here knew this and was likely a mathematician.

There is no confirmation that the person was (or was not) a Templar, though it is known that the Cistercians were linked to the Knights Templar. Perhaps the deceased was a Monk, although we cannot tell that either, from the decorations at the site.