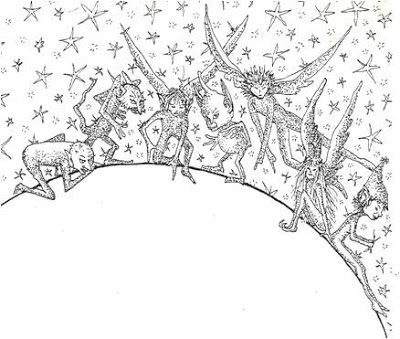 Halloween, or Samhain, the ancient pagan new year, is celebrated at the beginning of winter, a time when everything dies. Corn stalks, harvest sheaves, and scarecrows are all symbolic of the rituals and tradition of the harvest, the basis of the Samhain or All Hallows Eve celebrations. In agriculture, scarecrows are responsible for keeping the birds away. Other common Halloween symbols - cats, snakes, and owls - were depended upon for keeping grain stores rodent-free. In order to suppress pagan agricultural industry, these animals were demonized by the church, associating them with all things evil.

Samhain was a time when the gates to the underworld were believed to be opened and spirits roamed the earth freely.  Offerings of fruits and vegetables were made to honor the dead. Over time, a night to remember and honor the dead became a night of fear of the dead; a day when fairies and ghosts were about. This required masks to hide from the fairies and ancestor-worship rites to placate the spirits. Skeletons are symbols of the dead and a favorite Halloween decoration. Samhain was a night when the dead could cross over and communicate. This was an important time for divination, as any information about the nature of the coming winter was valuable.

Goblins, also a Halloween symbol, are not ghosts. Goblin is actually the  French name for Fairy Folk or Fair Folk, the descendants of the white-skinned blonde Maglamosian people; northern Europeans who, because of their knowledge of astronomy and natural sciences, were feared and powerful, and gained the reputation of being able to do magic.

A very popular activity at Halloween is carving pumpkin faces and lighting them from inside with a candle. These scary faces are sentries designed to scare off evil spirits; legends of the demon Jack probably originated from sightings of bog and marsh “lights” that looked like lanterns being carried. Referred to as Jack-O-Lanterns, they were caused by combustion of methane and marsh gasses.

The most common Halloween character of all is the witch. The word witch likely comes from a word meaning wise one. Pagan witches have many traditions. It is said that at their annual celebration they would marry, initiate new witches, and dance about on branches or broomsticks. Old pictures of witches show them worshipping a horned figure, most likely Cernunnos, the Celtic god of the woods, a Green Man. When the church attempted to stamp out or change all pagan celebrations Cernunnos became a devil figure. Later, witches were imaged with wings like a bat’s; bats fly at night and sleep hanging upside down, lending them to be associated with scary things.

Kids love to dress up and go out to Trick or Treat. Viewed as extortion by some, the tradition actually comes from a time when poorer families went house begging, offering prayers for the dead en exchange for food and money. This was called “guising” (disguising” oneself and knocking on the doors of the affluent) Those who gave were blessed with good luck, those who were stingy were threatened with bad luck. Trick or treat is actually a later American phrase and was known as a time of pranks that were supernatural in character, such as taking apart something large and putting it back together on a roof, or fixing a door so it wouldn't open. People gave candy to avoid having pranks played on them. As the popularity of pranking died out, candy was still given to groups of children who visited their neighbors in costumes to get some goodies.

Early Christians disliked Samhain’s association and connection with the supernatural, and spread the belief that spirits of the dead were delusions from the devil. Eventually the Celtic traditions became associated with the Christian hell, and were greatly feared. Today, less moral significance and more theatrical emphasis is enjoyed by those who practice Halloween traditions. As it is with December to January New Year celebrations, in Pagan and Wiccan traditions Allhallows Eve is considered a good time to make a new start or begin new projects.