The Color of Magic and the Evil Eye 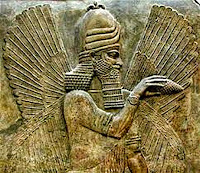 Belief that a supernatural power ruled over life and destiny led to superstitions of magic, sorcery, and divination. Divine gods rewarded our virtue and demons cursed our lives. Supplication of gods drove the building of temples, spurred good works, created prayers and ceremonies. But averting evil took magic through rituals, incantations, talismans, charms – and color. Gods used them as well – Marduk, a Babylonian god, carried a red stone between his teeth to ward off demonic influences. Christians wore the crucifix to defy the red Satan. Color was effective in invoking spirits, both good and evil, and has been part of nearly every ritual and ceremony. This included colored ink, paper, thread, ribbon, fabric, and plants.

One widespread superstitious fear was of the evil eye, which cursed a man with one glance. It is held that this curse was from the power of envy transferred from the viewer to the viewed. The cursed would be beset by misfortune, insanity, or disease. It went about wrecking their lives, loves, fortunes, and labors. To avoid the curse of envy, some would hide their success and health, dress their beautiful children in grunge, and go about as if there was nothing to envy. (It would seem this practice has not died out – grunge has been a popular fashion style for decades.) Hindu mothers put daubs of black on the foreheads and eyelids of their babes and tied a piece of white or blue cloth on the dress. 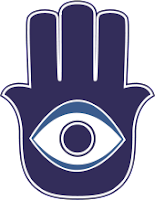 Talismans were designed to ward off the effects of the wicked eye, and color was important in their power. Some charms in Persia had a bit of turquoise in them. In Jerusalem the defense was a “hand of might” which was always blue, and worn as a bracelet. Scottish new-born babes had a piece of red ribbon tied around their neck. In England rings or amulets of red chalcedony were the talisman of choice. Italians used pieces of coral. In Cairo pottery beads were sold to caravans, and were tied to the forehead of the camels. In this way the gaze of the evil eye would be attracted to the beads, sparing the animals. Brass ornaments which decorate the harnesses of cart horses and shire stallions, and the brass horns rising from their collars, began as amulets intended to protect the animals from the wicked evil eye. Over time these powerful amulets degenerated into mere ornaments.

Color is and always has been important in magic. Magic formulas were usually written in red, as it is in the Egyptian Book of the Dead. Color had great power to resist evil and overthrow demons. When natural red stones were used and no fading took place, the power was greater. This reverence for color was not for beauty or aesthetic reasons. Rings, bracelets, and necklaces had meanings as a practical religious strategy. Some amulets of certain gems and colors blessed their wearer, bringing favor from gods and connecting them with divine beings. Color brought success to commerce, prevented disease, protected travelers by providing safety from shipwreck, lightening, and animal attack. Color even assured a wonderful harvest and managed the elements for beneficial results. The preferred colors for amulets were red, blue, yellow, green and white. Red amulets protected wearers from fire and lightening, and treated disease. Violet stones attracted virtue and faith. When worn by children, the stones assured heaven’s watchfulness, and encouraged obedience to parents.

Yellow stones attracted prosperity and instilled happiness. Green stones were connected to nature, causing fertility in man and animal. They brought rain and general strength. White stones were thought to come from heaven and bring its protection. For an all-purpose powerful gem, seek out a brown agate – it promises victory to the warrior, favor to the lover in his lady’s eyes, intelligence, happiness, health, and long life. What more is there?

Belief in color as a powerful force has faded away. Magic, sorcery, and divination survive today in the fortune tellers, crystal gazers, and spiritualists. Once divine, the supernatural has degenerated into so-called black arts. Amulets and esoteric rites were forbidden by Christianity, and only creatures of the devil practiced them. These were labeled witches and fiends, and were persecuted severely, accused of denying faith to practice sorcery. Yet before Christianity reached its height progressing through a period of tortuous inquisition and reformation, magic was often confused with it. Humans were mystic and penitent beings to whom color and god were one, a reverence rooted in the ancient knowledge that the sun brings life, and the light of the sun was powerful color. Today many holistic healers used colored light in their practice.


Posted by The Symbologist at 7:00 AM