Many philosophical and religious discussions come against the talisman. But none succeed. Christianity condemns them and yet crucifixes and rosaries perform the same function as talismans. Gods come and go, but talismans remain. Even a most academic and rational soul carries a good luck charm or a rabbit’s foot which he cherishes. Talismans and instructions as to how to make them have been discovered in many ancient sites. Talismans are evident in all occult traditions.

Some talismans are created only to do harm, but most are designed to protect against evil forces. Every religion, tradition, and belief system has its talismans. As time passed, they have become so intertwined that tracing individual origins is all but impossible. The magical amulets come in all shapes and sizes – rings, jewels, paper, gardens, even animals. The painting “Spring” by Botticelli was reputed to be a talisman.

Precious stones are formed by powerful natural forces. This makes them natural talismans, and they are used as such in all cultures.  Because of their presence on the garments of the high priests, Christians readily adopted the tradition and use of precious stones as talismans. Many ancient documents state that stones and crystals have healing properties. Modern science has discovered that each stone has a unique vibration pattern which can help stabilize the functions, or malfunctions, of the human brain, which also emits vibrations.

There are different ways of using amulets for various ailments. From writings of the 1600’s we learn that an emerald worn on the person controls lust,  strengthens the memory, and blesses ones rhetoric. Rubies and carbuncles provide protection from plague and poison, and increase gifts of fortune. They can also reconcile persons in a lawsuit. Sapphires produce peacefulness, amiability, and piety. When angry or lying persons hold a diamond in their mouth, these traits are cured. Topaz neutralizes any poisonous liquid, and pearls cure headaches.

For a talisman to have any power it must be engraved with a mark, symbol, or sign. DeGivry found these directions in a manuscript from 1671:

“A talisman is nothing else than the seal, figure, character, or image of a celestial omen, planet, or constellation; impressed, engraved, or sculptured upon a sympathetic stone or upon a metal corresponding to the planet; by a workman whose mind is settled and fixed upon his work and the end of his work without being distracted or dissipated in other unrelated thoughts; on the day and at the hour of the planet; in a fortunate place; during fair, calm weather, and when the planet is in the best aspect that may be in the heavens, the more strongly to attract the influences proper to an effect depending upon the power of the same and on the virtues of its influences.”
That in itself is a tall order, making a true talisman rare and exceedingly valuable. There is a difference between magnetized and unmagnetized talismans. To magnetize the amulet, it must be the right substance, and engraved at a propitious time by a focused artisan who keeps his mind on the work at hand.  You can have a talisman for each day of the week. Like all effective amulets, they must be engraved on the day’s corresponding metals – on gold for the sun, etc. The correct one for each day must be worn.

Some talismans are so useful that if they were generally used they would improve our world considerably. They have most useful powers. One provides protection for you, even late at night in the most cut-throat part of town. Legend says that even in a fight you will not be hurt and your opponents weapons will be turned against him. Another protects against accidents on Saturday – Saturday being an evil day against which one needs protection. Others help you acquire a good memory (is that a memory that works well? Or a memory that is pleasant to recall…). This talisman must be inscribed on Hyena parchment, which should not be too difficult to procure. 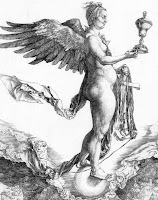 Then there are fortune talismans. One depicts Fortuna standing on a globe. Any research of talismans brings up the name Catherine de Medici. Her propensity for the occult is well known. She owned a now famous amulet, made to impart sovereign governance and knowledge of the future.  A very well-known image is called Solomon’s Seal, although you may not recognize it as a talisman. It is made of two overlapping triangles which form a hexagram. The divine name (tetragrammaton) is inscribed in the center. The information we now have about the origin of this magic amulet may add to what we know about talismans in general.

Hexagons are six-sided shapes. Evident on the crust of the earth, in the formation of rocks, dried corn, and snowflakes, they are formed by pressure from the outside. This is the basis of the “hex”: subjects of the “hex” find themselves surrounded by pressure. Hexagrams of overlapping triangles were used in the days of Solomon to contain evil spirits, trapped by the surrounding pressure. (Pentagons are formed from stretching – pressure from within pushing out.)

A hexagram is a six pointed star composed of two overlapped triangles. The beginnings of the hexagram are seen as far back as 77,000 years, with an upward pointing triangle symbolizing winter solstice sunrise and sunset. By 14,500 BC, summer  and winter solstice sunrises and sunset s were represented with overlapping triangles, one pointing up, one down (Duncan-Enzmann).

According to Christopher Knight, as he states in “Solomon’s Power Brokers,” the hexagram known as the Solomon’s Seal, or the Star of David, has roots not only in ancient astronomical observation, but observations done at a particular place, at the latitude of Jerusalem. There is another talisman worn by Jewish children during Bar Mitzva called Shaddai. It is a round metal badge inscribed with that name, and it is of very ancient tradition. Christian Cabalists and magian sorcerers all obtained them. A talisman depicting a hand-drawn Solomon’s Seal was taken off the body of Anslem, Bishop of Wurzburg, Count of Ingelheim; he was an adept in alchemy, and was found dead in his bed.

Many legends have been told about the Mandrake, a natural talisman. The plant we know is probably not the same plant in the Scriptures (dudaim, or love plant), mentioned in Genesis and Song of Solomon. Legend records that it was of Venus, and could make barren women fertile. Some believe it was Ginseng, which has fertility enhancing properties. All writers of the Middle Ages mention that there is a male, and a female plant - its name is likely because the roots are said to resemble tiny humans. Some believed the plant was demonic, as it could reveal knowledge of the future, by shaking their heads when questioned. They were featured in the Harry Potter movies, mentioned by Shakespeare and Machiavelli, and sung about by John Donne. 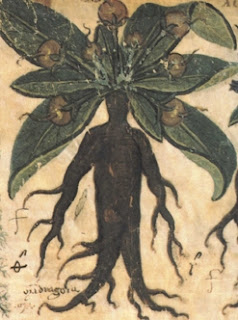 
Posted by The Symbologist at 7:00 AM