We have orbited the sun again, and now it is time to change the numbers; 2018 becomes 2019. The past year is memorialized in blogs and posts and newscasts and photos and instagram, portraying images and stories considered important during the past 365 days.

Perhaps you have always practiced a turning-of-the-year tradition, perhaps you are new to New Year celebrations at midnight on January 1st. In some cultures like Egypt the new year starts at harvest time. Why does our year change when it does? It all has to do with Sirius, a very bright star that has guided navigators for millennia; in fact it is the brightest star in the sky. It is actually a binary (double) star which has been observed since prehistory.

Ptolemy of Alexandria used Sirius as the location for the globe’s central meridian when he mapped the stars. Sirius is called the Dog Star, due to its position in the Canis Major (Greater Dog) constellation; many cultures associate this star with dogs. Sirius marked the coming of winter for the Polynesians, for the Egyptians it foretold flooding of the Nile, in Greece it accompanied the hot, “dog days” of summer. Its name means sparkling, or scorching. In the children’s rhyme Hey Diddle Diddle Sirius makes an appearance: The little laughing dog is Sirius in Canis Major, marking the growing season which “laughs” bountiful; the dish and spoon are so full - it is more than we can eat.

In ancient times Sirius was called the "Star of the Sea," and was depicted as an inverted pentagram. Some early American flags connected with the Navy displayed inverted stars, like the one flown by Commodore Perry in 1854. A rare contemporary usage of the inverted pentagram symbolizing Sirius  is the American Medal of Honor.

Eight thousand years ago the Vanir astronomers worked out the geometry and trigonometry necessary to accurately measure the distance and movement of the stars and planets (Enzmann). They devised the calendar, named the days of the week, and discovered the accuracy of the Venus clock – with which we set the world’s clocks until the 1970’s. They also observed the cycle of Sirius, and began the year with its pinnacle. The symbol for the Venus clock - the pentagram - is sometimes used for Sirius. Knowing the time is one thing, knowing when to reset the clock is another.

Once a year, when Sirius is opposite the sun, it rises when the sun sets. This marks a new beginning: A new year rings in at midnight, the moment it reaches its highest point in the sky on the celestial meridian. To us it is the New Year Star, a blazing reminder that our orbit starts again.

At this new beginning humans like to make a new start. New Year’s resolutions abound, good intentions are had by all. We promise ourselves we will avoid the seven deadly sins, be nice to our in-laws, go to the gym three times a week, and give up that one sweet treat we always regret eating. Sometimes we keep our promises, sometimes not; but each year Sirius gives us another chance. Another new beginning.

As long as we live the Earth will turn, the Sun will rise, and Sirius will start a new year. This year, promise to do something that will last, something that will create precious memories, new traditions, or a family legacy. That way, when we are gone and the Sun still rises, something of ourselves will continue; an immortality of sorts.

And have a Happy New Year!! 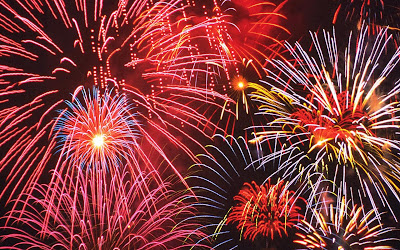