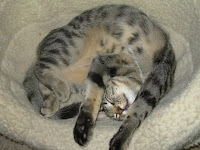 Cats are a constant source of amusement, humor, affection, comfort, fear, and suspicion. The domestic cat, Felis Catus, is found in the most comfortable location in any house, and has a passionate approach to napping. The fairy tale Puss 'n Boots was originally a story about how wonderful it was for a little girl to have a cat to take care of her. Domestication of cats is an ancient practice dating back at least 10,000 years.


The history of cats and their symbolism is shared by the owl and the snake. What do cats, snakes, and owls have in common? The answer to that is pivotal in the history and symbolism of all three, cats especially. They all eat rodents; one rat can ruin an entire cache of grain. All three animals were encouraged to frequent farms in northern Europe; milk was left by farmers for them so they would return - this became a practice of leaving "gifts" for their animal friends, then "offerings" to the animal spirits. In European legend the Corn Cat cared for corn crops; when harvested it retired to a special sheaf set aside for it, until the next growing season. 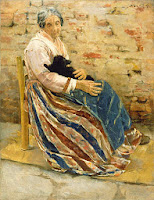 During the Dark Ages, in an effort to subvert Pagan culture, the Church demonized all three animals and it became illegal to even own one as a pet. This effectively destroyed the agricultural commerce of those outside the Church, crushing their independence. From this slander came the modern demonic associations in symbolism to all three (Duncan-Enzmann).

Prior to their deconstruction, cats, snakes, and owls held places of honor in the myths and traditions of many cultures. Cats and snakes, or serpents, are sometimes adversaries, sometimes colleagues. All three animals are sacred in various religions, but the cat holds a special place in the homes of the gods, not to mention the homes of humans. Indeed, during the first century BC it was illegal to kill a cat, and if the murderous act happened after an eclipse, the killer might be torn apart by a mob. St. Agatha was called St. Cat, and the patroness of cats is St Gertrude.

Royal and sacred cats are evident in the cultures of Egypt from 2500 BC. Egyptian temples dedicated to the sun had images of cats in them. A symbol for sun god Ra is a cat, and they are sacred to Isis. Egyptian goddess Bast, or Bastet was imaged with a cat's head; earlier depictions were with a lioness's head. Linked to protective forces, cats were known to defeat snakes and were worshiped for their ability to defeat the enemy Serpent.

Greek goddess Hecate can turn into a cat; she is a goddess of witchcraft. This perhaps was influential in the belief that witches keep cats. The furry feline is also sacred to Diana (Artemis); her brother Apollo, the sun god, is imaged with or as a lion. In Indian religious iconography, the vehicle of sage Vidali is a cat. For two hundred years the Siamese cat resided only with monarchs; Burmese and Siamese believe that cats enshrine spirits of the dead. Scandinavian goddess Freya has a chariot pulled by two cats. The goddess Virgo, who holds a sheaf of grain, or corn stalk, has a cat guardian. Indeed, the Virgin is linked to the cat; Helen, Frigga, Pasht, Artemis, Diana, Maya, and Mary, all, like Virgo the Virgin Mother, have the same attributes. They are linked to the moon, and to the cat. Hercules was given a lion.

When the Christian church demonized cats to a superstitious world, every black cat became a devil, and every old woman who kept cats became a witch. Indeed, a woman was hanged in Exeter because a neighbor saw a cat jump into her cottage window one evening. No further proof was needed. Demons and sorcerers of many traditions are priests and gods of older religions cruelly misrepresented by intolerance and efforts by the church to subvert them. A common belief was that souls too corrupt to inhabit human bodies were in beasts like cats, lions, and monkeys. Since that time, cats have become associated with demons, ghosts, omens, vampires, genies  corpses, and witchcraft. Demonic stinging cats are the enemy of the Celts. They are both charms and talismans.

Cats are representatives of Hecate, goddess of death, and there are many recorded instances of cats appearing right before someone died. In Egypt, cats were credited with considerable powers of clairvoyance. Cats feel beforehand and react to magnetic and meteorological changes. According to physicist Duncan-Enzmann cats, and many animals, can smell water, different types of land and vegetation, and navigate by the stars and sun. This explains their uncanny ability to travel great distances over unknown terrain and return home. Cats were watched in olden time to forecast nature's varying moods. Almost universal is the belief that a cat cleaning behind its ears with wet fore-paws foretells rain. Some cats even display telepathic ability to know when their master returns.

Cats, and other felines, are prevalent in symbolism. They are the fourth sign of the Chinese zodiac, corresponding to Cancer. Cats represent the Great Hunter - they are most present while seeming most absent, relentless in purpose, have unerring aim, and are able to see in the dark.  Goddess Liberty is often imaged with a cat at her feet. In Heraldic iconography cats have been used by companies of soldiers as they symbolize liberty. Romans often used cats on banners, most likely to symbolize the goddess Liberty. After the fall of the Republic, a cat at the feet of a Pope symbolized treason and hypocrisy.

The cat in Native American symbolism denotes cunning, ingenuity, and forethought. Unlike many other cultures, they consider cats neither friend nor servant to mankind. Cat characters are found in the fables, fairy tales, folklore, and poetry of many cultures; Puss 'n Boots, The Cat in the Hat, Lewis Carol's Cheshire Cat, and Duck Wellington's Cat are only a few. 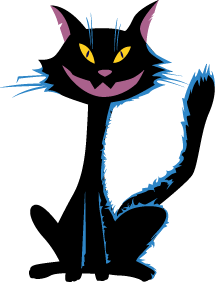 There are many common expressions about cats:

Playing cat and mouse is an expression derived from the association of the cat with the sun and moon, and the mouse with clouds. The sun darts in and out of the clouds playfully, before dissipating it, as a cat plays with a mouse before pouncing. In Puss 'n Boots the Cat persuades the ogre to become a mouse, then after a good chase, eats him.

Cats are blessed with nine lives; Apollo, the god of light, was the producer of the original nine month lunar year and is surrounded by nine sister muses; these nine muses grew out of the nine month gestation period - one muse for each month. In Egypt there are three companies of nine gods, also derived from gestation trimesters, as is the trinity of trinities.  Freya, the Norse goddess whose chariot is pulled by cats is connected to the number nine, and she is, in part, a goddess of witchcraft.

White or black cats being good or bad luck depends on where you are. In some cultures a black cat is not bad luck, as it is not associated with death, and in some places a white cat is because it is the color of ghosts.

Cats are associated with foreknowledge, and in Japan linked to genies and vampires. The Sephardim (Spanish Jews) believed vampire cats lived among them; Lilith (created before Eve as Adam's first wife) lives as a  black cat named elBroosha, also known as a Screech Owl or Barn Owl, associated with witchcraft. Cats have become symbols of life and death, day and night, sun and moon, good luck and bad, deity and devil. Whatever has befallen them, today these cunning creatures are sometimes family pets, but mostly ignored, like an old toy we would be embarrassed to play with. 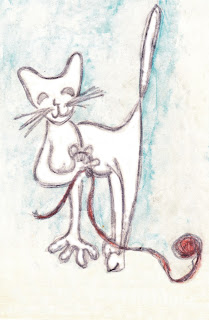 Just remember, when you come home to your dog, he wags his tail and you feed him and pet him, and he thinks "wow, you are a god." Your cat sees you, rubs up against your legs, you feed it and pet it, and it thinks "wow, I am a god."