The Wonderful World of Wings


Wings are used symbolically worldwide. Some of our favorite mythological and magical beasts have wings: angels, harpies, demons, dragons, sphinxes, griffins, gorgons, gods, and even inanimate objects like the royal orb and Caduceus rod.

In the long-ago prehistory of the Maglamosian, Vanir, and Æsir people, and in nature itself, we can easily observe the functions of wings. In Alchemy and esoteric symbolism winged symbols represent volatile elements, indicate the ability to commune between heaven and earth, or signify a connection between the spiritual and temporal. Angels are the messengers of God and have the wings that accompany your spirit into its eternal home. This stems from the time when North was toward Cygnus, the Swan constellation in the Milky Way; wings or birds signifying north as we use a red and white striped pole today. In both Egyptian and Masonic symbolism an hourglass with wings can be found. Wings represent movement through air; in that respect it is reasonable to use wings as a symbol for the movement of time. Perhaps we could interpret the winged hourglass as “time flies”? 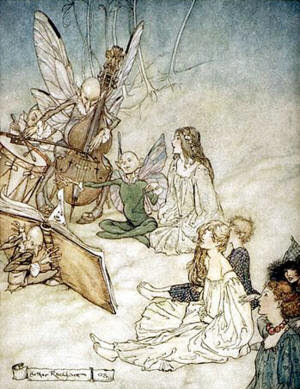 The wings of a Fairy symbolize functional concepts. The Fairies were descendants of the Magdalenian culture, ca. 12,500 BC, a culture that survived the brutal iron cold of an ice age. It was so cold that frost-bite could happen in minutes. In order for these people to survive, methods of keeping warm had to be perfected.

If you snowshoe, snow-mobile, or ski you know that down-filled clothing is very warm. Until the invention of space-age materials, Eider-down clothing was considered the warmest clothing on earth. Our prehistoric ancestors knew this as well. They harvested down, quills, and other feathers from the ground after ducks migrated overhead. At that time migrations consisted of millions of birds; there were so many birds they blacked out the sun and made a substantial amount of noise. Feathers were considered a gift from the birds to the human babies, to keep them warm and insure their survival. This is reflected in symbols and mythologies of mother’s with wings and birds that are mothers such as Mother Goose. Expert weavers in prehistoric villages made the quilted clothing; wings on Fairies symbolize, in part, their skill as weavers. (Duncan-Enzmann)

Another aspect of wing symbols grew out of navigation. The oil for Magdalenian lamps was partly supplied by fishermen who sailed the gyre hunting the Great Auk.  In the story of Noah (Old Testament.), when the waters were receding, he sent a bird out from the ship to assess how far they were from land. This was common practice among ancient mariners. When a bird did not return, land was near and a carrier pigeon was sent with a message to the land-dwellers that a ship was incoming. Symbols of Gorgons (navigators) with wings on their heads or helmets represent those who knew these practices. Likewise, images of Fairies with wings can represent the knowledge of how to use birds for communication with ships.

As symbols of: flight, travel between heaven and earth, quilting weavers, navigational measurement, communication over distances, movement of time, volatile elements, and the path of the spirit between life and death, wings are found in cultures worldwide.