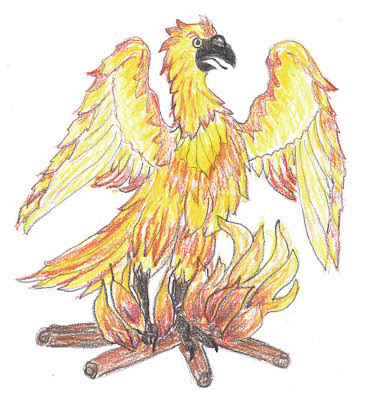 The legend of the Russian Firebird is the ancestor of the Phoenix. The Firebird is a large bird with majestic plumage that glows with red, orange, and yellow light. The feathers do not cease glowing if removed; one feather can light a large room. In later iconography, the Firebird takes the form of a peacock, with a crest on its head and tail feathers with glowing "eyes.” In Faerie tales the Firebird is typically the object of a difficult quest, usually initiated by the finding of a lost feather. The hero sets out to find and capture the live bird. At first the hero is charmed by the wonder of such a creature, but eventually the hero blames the bird for his troubles. According to Russian folklore, the Firebird, owned by Tsar Vyslav Andronovitch, was used to steal golden apples from a nearby tsar’s garden. Another Russian tale states that a feather from the tail of the Firebird was presented to the Tsar by a knight-errant. The Tsar greatly desired the whole bird and sent the reluctant knight after it; in this tradition, the Firebird was huge and aggressive. In contemporary literature - the Harry Potter series, written by Cynthia Rowling - the Firebird’s descendant, the Phoenix, assists the hero in overcoming the Basilisk.

The Phoenix is a fabulous bird known for extreme longevity; likened to the stork, eagle, heron, falcon, and peacock the bird is capable of auto-combustion and can self-regenerate from its own ashes. In the accounts of Herodotus and Plutarch, the Phoenix originated in Ethiopia as a mythical bird of matchless splendor and extraordinary longevity. Having been cremated upon the funeral pyre, the bird was reborn from its own ashes. This peculiar bird is part of mythologies all over the world. The Turks call the Phoenix kerkés, simurgh is the name in Persia, and the Taoists know it as the cinnabar bird. In Egypt, it is called bennu and is sacred to Ra. The heron and Phoenix are both ancient symbols of the primeval flood and the inundation of the Nile. The Imperial Romans used the Phoenix as an emblem for the undying Empire. C. d’Alviella said it well:

“Amongst the Egyptians, the Phoenix rising from its ashes represented the sun resuscitating every  morning in the glow of dawn. Depicted on a pyre, and encircled by a halo of glory, this solar Bird became, amongst the Romans, the emblem of the imperial apotheoses, and then passed to the sarcophagi of the Christians, as a symbol of the Resurrection.”

The Phoenix is related to the Roc and the Garuda of Hindu mythology. The fabulous creature was friend to Quetzalcoatl, bringing blessings and happiness to the Aztec, Toltec, and Maya. In Chinese lore the Phoenix is called Feng Hwang, one of the four sacred creatures of the directions, representing the solar Yang and lunar Yin powers. Japan calls it the Ho-O, a bird representing the sun, which comes to earth in successive ages to herald a new era. In Arabia, the Phoenix is associated with the sun; in their legends the bird sits in a nest that is ignited by solar rays. The Greek name for the palm-tree is Phoenix; in some folklore the Phoenix nest is on top of a palm tree. The branches of the palm tree have long been associated with the sun. In Christian iconography, the three-day rebirth of the Phoenix is considered a perfect figure to represent the resurrection of the Christ on the third day, and it was the only creature in the Garden of Eden to resist the temptation of Eve. 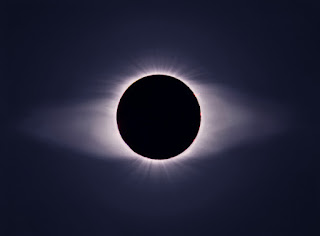 Like many ancient symbols and myths the Phoenix has its roots in astronomical observations, and ancient cultures that recorded them. The myth of the Phoenix grew from the spectacular disappearance and reappearance of the sun during a total eclipse. Venerated as the manifestation of the sun god of Heliopolis, the Phoenix appears only once every thousand or so years. Legends claim there is never more than one Phoenix at a time in the world; total solar eclipses are rare events. Although they occur somewhere on earth every eighteen months, they have been estimated to recur at any given place only once every few centuries. As the eclipse progresses, the corona and sun flares become visible to the eye; they could be described as a great bird that catches fire, dies, and then is reborn. Our ancestors observed and recorded the phenomenon, and legends of the Firebird and Phoenix were born.