Secrets of the Twelve Dancing Princesses 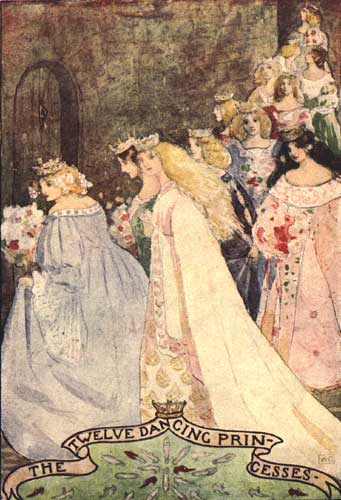 Fairy tales are vehicles for the transmission of history from ages lost in the mists of time. Clues to the lives and traditions of our ancestors are embedded in layers of characters, symbols, and story. Numbers are symbolic in fairy tales, hinting at astronomical awareness of the culture originating the tales. The story of the Twelve Dancing Princesses has its roots in the astronomical knowledge of pre-history. Twelve is a particularly significant number, associated with the ancient division of the sky into 12 constellations. It is common also to describe the movement of heavenly bodies, which move forward and back – as “the dance.” Each planet’s dance is different.

In this story, there are 12 princesses who sneak out of their room every night, and when they return, their shoes are worn out from dancing. The king, beside himself, finally finds a hero to find out what the girls were up to. Twelve beautiful princesses slept in twelve beds in the same room, with doors locked securely. Each morning their shoes were discovered to be worn out as if they had been dancing all night. The king, desperate to discover their secret, offers a prize to the one who did, but failure meant death. Several princes fail, but a soldier tricks the twelve girls and follows them through a trap door in the floor, into twelve boats, down a river to a castle where, sure enough, the girls dance all night with twelve princes. The soldier retrieves a branch from each of three trees; one of silver, one of gold, and one of diamonds, and a golden cup, which he gives the king as proof.

With roots in the astronomical knowledge of pre-history – some goes back 77,000 years – this tale tells of keeping of secrets (represented by the mysteriously worn-out shoes, which represent a year) and getting to know the twelve zodiacal constellations (the princes they dance with). Together the princes and princesses make twenty-four, the number of hours in a day. A wonderfully enchanting story, it is filled with symbols and allegory. Time is illustrated by the river and boats, and the twenty-four characters “dance” with the mathematics necessary to measure time using the stars. It is one of many tales referring to “stories written in the sky,” which allude to ancient knowledge of seasons and natural cycles – stories embodied in the zodiac. The locked room holds the secrets of the ancient navigators. The garden of trees with gold, silver, and diamond leaves is similar to a garden in the epic of Gilgamesh. The golden symbolizes the golden ball of sun or the grail.

This wondrous tale is one of thousands that carry secrets and buried history from the world of once upon a time. All we need to do is look, and we will see. 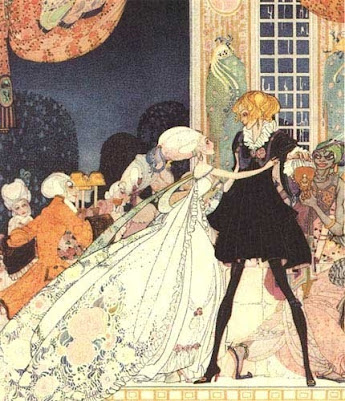 A Tale of Three Kingdoms, Book 1: The Lost Unicorn

A Tale of Three Kingdoms, Book 2: The Lost Mermaid

A Tale of Three Kingdoms, Book 3: The Lost Dragon

Call of the Dragon and other Tales of Wonder

Tears of the Dragon and other Tales of Wonder

The Fairy Tales, Once Upon a Time Lessons, Book 1

Symbology: Secrets of the Mermaids

Posted by The Symbologist at 12:03 PM